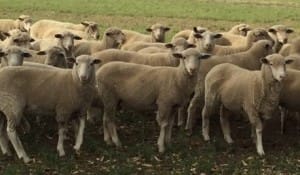 At the Cowra and Griffith saleyards on Friday, trade lamb prices fell $5-$8, light lamb rates slipped up to $8 and heavy lines were $6-$8 cheaper.

Although some well-finished lambs were offered, more drier lambs affected by the continued dry seasonal conditions are being yarded in saleyards.

The ESDI and national indicator for mutton both closed down 1 cent to 298c/kg on Friday.

The NLRS said lamb quality was very mixed, with a higher percentage of lambs showing the effects of the continuing dry weather. Some well-finished lambs were penned. Not all the usual buyers were present or competed in the cheaper market.

The NLRS said lamb quality varied, with some well-finished heavy weights, but more drier lambs. Mostly heavy lambs were penned, with limited numbers of trade weights and stores. All the usual buyers operated, but competition was weaker, resulting in an easing of the market.

Last week, stock were on the move with a line of Dorper wether lambs making the 1350km journey from Augathella, Queensland down to Rochester, Victoria, and Merino wether lambs getting trucked the same distance from Warren, New South Wales, to Kingscote, South Australia.

Demand was strong for Merino ewes with supply matching demand. Merino ewes accounted for more than half of the ewes offered last week. Strong buyer interest increased prices an average of $14 in all age categories. Young ewes made from $110-$217 and older ewes averaged $120.

The Merino wether offering continued to be dominated by lambs which sold from $50-$93.50 to average $74. The top price was reached twice; including at Wombelano in Victoria, with 685 July-August crop mid-December shorn MerinoTech blood lambs weighing 13.8kg cwt and mostly score 2. The NSW lambs were a line of 800 August-September drop wethers, 19.1kg and mostly score 2.