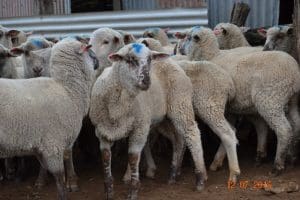 Quality is slipping in the major slaughter lambs grades in most centres and the turn-off is now coinciding with several processor maintenance shutdowns, but domestic and export processors are still paying 600c/kg-plus for well-finished lines.

However, the best slaughter lambs at Bendigo were still quoted at 625c/kg to nearly 700c/kg, buoyed by continued strong domestic demand. Similar and sometimes higher prices were paid at Ballarat.

At the South Australian Livestock Exchange at Dublin, the NLRS said most lambs sold $10-$20 cheaper and up to $25 lower.

In New South Wales saleyards, the heavy lambs bore the brunt of the correction, with prices dipping $3-$7 at most centres. At Forbes on Tuesday, trade weight lambs sold $6-$10 easier at $122-$154, and heavy and extra heavy weight lamb prices dropped $10-$12.

More new season lambs are being yarded in several centres, including Dubbo, Corowa and Forbes in New South Wales, Bendigo in Victoria and at Dublin and Naracoorte in South Australia.

The ESDI for mutton was 4 cents lower on 389c/kg and the national indicator also dropped, to 383c/kg, down 4 cents.

In New South Wales, the NLRS said over-the-hook lamb and mutton indicators trended slightly lower week-on-week, although only one contributor lowered their rates. Most contributors took a wait-and-see approach to what is expected to be a higher supply situation at saleyards this week.

The NLRS said lamb quality was generally good, with some trade and heavy lambs showing plenty of finish. There was also quite a few plainer lines. Some good runs of Merino lambs and a few stores were offered. Not all the usual buyers operated, but competition was generally solid, resulting in only a slightly cheaper market.

Most grades of mutton were represented and quality varied. Most grades sold firm, with light 2 score Merino ewes averaging $71. The better 3 and 4 score first cross ewes mostly sold from $93-$116 and heavy Merinos made $108-$131. Merino wethers sold to $118.

The NLRS said lamb quality was fair to good, with some lambs still showing the effects of the recent wet weather. There was more light lambs and a good supply of trade weights and heavy lambs around 24kg. Extra-heavy lambs were in short supply. There was also good numbers of light and trade weight Merino lambs. All the usual buyers were active.

Sheep quality was very mixed. Prices were cheaper for most, with some processors not operating fully. Medium weights sold from $72-$112 and heavy crossbred made to $155. Most of the better-shaped and weighted mutton averaged 375-400c/kg.

Restockers were active on the plainer condition lambs at cheaper prices and the quality of the lambs also fell. Most of the lambs are running out of time from an age perspective. The sheep market also showed cheaper trends.

The NLRS said a week of drier weather lifted numbers, but lamb quality continued to be very mixed. Some well-finished lines and plainer types were offered. Most were heavy and extra heavy weight lambs. The usual buyers competed in the cheaper market.

The sheep were mostly Merinos and quality was very mixed. Prices were firm to easier, depending on quality. Merino ewes sold from $78-$115. Crossbreds made $81-$120. Merino wethers sold from $79-$136.

The NLRS said lamb quality was fairly good, with several runs of well-finished supplementary-fed lambs and light lambs in the sale. Light and trade lambs sold $2-$5 cheaper and heavy lambs were $5 dearer.

There were more heavy sheep in the yarding of mostly better quality ewes and wethers. Prices were up to $10 dearer due to the improved quality and stronger buyer interest.

The NLRS said lamb quality was much plainer than a week ago and the supply of quality trade and export slaughter lambs was limited. The market was cheaper and varied a lot, with quality and weight key factors in prices.

The best trade lambs were a few dollars easier, while secondary lambs and light slaughter lambs fell by $10-$20 when compared to the buoyant results of the previous Monday. The other issue affecting the market was skin values, with reports the Chinese tanning industry has slowed and most buyers were working on reduced returns of $3-$7 for crossbred lamb skins.

Some new season young lambs appeared in the market for the first time, but they were immature types lacking weight and finish and couldn’t be considered a price indicator.

The market reached a top of $196 for heavy export lambs estimated at around 30kg cwt. There was only about a dozen sales over $180, with most of the heavy lambs making $165-$185. Domestic buyers still paid up to $187 for the pick of the heavy trade lambs. The best slaughter lambs over 22kg ranged from an estimated 625c/kg to nearly 700c/kg, mostly selling around 640-660c/kg.

Bidding for secondary lambs lacking carcase finish was much more erratic and these pens recorded mixed price results. Some processors which usually buy light kill lambs were absent and there were significant price corrections for 12-16kg cwt lambs that mostly sold from $60-$90.

Odd sales of heavy ewes showed a slightly dearer trend, while some of very plain, fat score 1 pens were cheaper. Overall the average run of mutton remained in a similar carcase price range to last week. Extra heavy crossbred ewes sold from $107-$140, heavy Merino ewes made to $128 and shorn wethers sold to $120.

The NLRS said lamb quality was average, with most of the regular buyers attending in cold and wet conditions.

Restockers and feeders were again active, with feeders paying from $115-$175 for lambs and the lighter drafts selling to restockers at $65-$100. Restockers also paid from $120-$152 for first cross ewe lambs and $80-$97 for young Merino wethers.

The NLRS said a small field of trade and processor buyers was active on the mixed quality lamb offering, along with a small number of restockers. Lamb prices fluctuated throughout the sale, with lighter types selling cheaper while the heavier lambs were dearer.

The NLRS said quality lifted this week, with some good drafts of heavy lambs and a few pens of new season heavy trade weights. Two major processors remain out of the market under maintenance, but all other buyers, including live exporters, were active. Lamb prices were slightly dearer largely due to weight and quality, but most other categories were firm to marginally dearer.

Restockers were active on suitable ewe hogget and sound older ewes, with large-framed young Merinos with a good jacket making $76-$105.

Wether prices continued to be firm, particularly the lighter and store drafts. Heavy export wethers made $95-$108 and longer wool drafts to $115. Lighter and store drafts were firm to $4 dearer at $85-$110. Rams sold firm due to solid export interest. The better ram lamb drafts made $90-$105 and suitable younger drafts sold to export feeders for $50-$89. Old rams sold to processors for $50-$65.