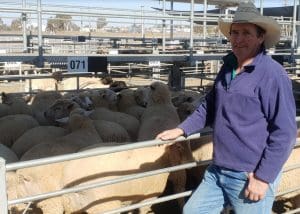 Stuart Steiger with his $292 lambs at Tamworth.

LAMB prices leapt higher in eastern states saleyards this week, with a new national record of $292 at Tamworth and centre records at Dubbo, Bendigo, Dublin and Ballarat for extra heavy weight lambs.

On Monday, Griffith’s national record of $284 last Friday was beaten twice with the $292 at Tamworth and Dubbo’s new centre record of $286.20. Heavy Merino lambs at Griffith also sold from $199 to $252, to set a new Australian record for Merinos.

The latest price movements followed Wagga Wagga’s national record of $281.20 for crossbred lambs last Thursday, held only for a day before the Griffith sale.

However, more significant for producers generally was the firming this week of carcase weight prices at 800c/kg-plus for crossbred new season trade weight lambs, and for the quality trade weight and lighter export weight old lamb lines. Most other slaughter lambs are selling for 650-700c/kg-plus depending on quality and weight, and restocker lambs at times have been selling to extreme levels up to 1000c/kg.

The eastern states’ price movements are in stark contrast to saleyard rates in Western Australia, where lamb prices are running at least 100-200c/kg behind.

At the Tamworth Regional Livestock Exchange on Monday, Ian Morgan Livestock auctioneer Ben Goodman extracted a new national record of $292 from Fletcher International Exports for the Steiger family’s 28 tail-end White Suffolk cross lambs. The 10.5-11 month-old lambs had an estimated carcase weight of 38-40kg with a $6-$8 December shorn skin, giving a carcase weight price around 750c/kg. The Steigers also sold another 22 of the lambs out of first cross ewes for $280.

The Steiger’s prices beat the family’s previous local record of $253 set on June 25. Stewart, son Mitch and brother Phillip watched the sale. There lambs this year sold from $180-$292, averaging around $220.

“I didn’t think it would go like that today; we were just lucky we struck a good sale, I think,” Stewart Steiger said.

“It was a pleasant surprise in drought, to get that in a dry time.

“I wish I had another truck load for next week.”

“The feed bill at the moment’s not too pretty,” he said.

“But every drought’s been broken by rain, so it’ll come – sooner rather than later, I hope.”

The Steiger’s run their sheep within a largely beef breeding and feedlotting operation. The lambs were finished on a struggling Drover oat crop in March after 18mm of rain with MAP. The crop has had a few falls of 4-5mms of rain since, but Mr Steiger believed it was the 150kg/he of urea pre-sown into the seedbed in January, plus the water-saving benefits of direct drilling and a press wheel that kept the crop alive for the lambs.

Mr Goodman said the Steiger’s oat crop was the only one in the district. He said the price record could be beaten or buyers could soon decide the current rates were not viable and wind operations back.

“It hasn’t happened yet and it may continue if we start with an 800c/kg figure on the trade lambs, we may see it going forward.

“That will be the next step; that’s where it is going to go to, we could be there next week.”

Dubbo agents Ross Plasto and Aaron O’Leary from Plasto and Company, with the record-priced $286.20 crossbred lambs.

At the Dubbo Livestock Exchange on Monday, a new lamb price record was set for the fourth week in a row.

A line of 211 Poll Dorset lambs was sold for $286.20 by Ross Plasto and Aaron O’Leary of Plasto and Company, for Adam and Natasha Whillock of ‘Haddington’, Wellington.

The lambs were estimated to weigh 44kg cwt and were bought by Thomas Foods International.

Mr Plasto has been a regular at the Dubbo saleyards since he was an infant.

“I have never seen prices even close to it.

“We are lucky that the market is kicking along,” Mr Whillock said.

“They were on the road and neighbours were saying ‘what are you doing, waiting for the market to drop’.”

A couple of years ago, the Whillock’s made and stored hay and grain, which they are now feeding out.

“These ones weren’t as good as what we would normally sell, but it’s a great price in a tough season.”

At Bendigo on Monday, the NLRS said extra heavy export lambs were limited to a few pens which sold from $260 to a new saleyard record for Bendigo of $278 to push carcase estimates over 800c/kg. Processor demand was strongest across the heavy and medium trade lamb categories.

At Naracoorte on Tuesday, the NLRS said after the extreme pricing of the previous week, prices again increased with several pens returning well over the 800c/kg mark, and some breaking 900c/kg cwt. This was despite the offering being very mixed with a wide range of weights and condition being on offer.

The first new season lambs, with restockers paying $55-$74 for the very light lines and the light trade and trade types making $122-$164.

At Ballarat on Tuesday, the NLRS said after 15mm of rain overnight, heavy lambs sold up to $10-plus dearer and quality trade weight lines made $5-$10 more than last week.