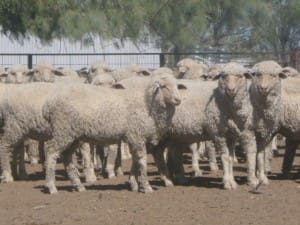 More buyers competed for the lambs at Cowra and Griffith on Friday, lifting trade lamb prices by $3-$5 and heavy lamb rates by up to $4-$6.

The National Livestock Reporting Service quoted its Eastern States Daily Indicators for trade and heavy lambs as slightly improved after Friday’s saleyard sales, but generally 3-5c/kg lower for the week. All other ESDI lamb indicators were unchanged or slightly lower for the day.

The ESDI and national mutton indicators equalised at 299c/kg.

AuctionsPlus reported an increase of 3181 sheep and lambs to 65,864 in its online eastern states sales catalogue last week.

High numbers of younger Merino ewes and Merino wethers were offered in the three sheep sales last Tuesday and in Thursday’s sale.

Merino wether numbers increased slightly on AuctionsPlus last week, with lambs again dominating this category. Wether lambs this week averaged $64, which was down $2 from last week for this category, but buyer confidence was still present. The top price was a line of 560 woolly August-September drop wethers from Bourke, NSW, weighed 16.3kg cwt and were mostly score 1. Their price of $93 was $10.50 higher than last week’s top-priced wether lambs. The top-priced hoggets this week, at $80.50, was some end-May shorn 16-18 month-olds from Skipton, Victoria. The Nerstane blood wethers weighed 16.3kg cwt and were mostly score 2 and 3.

AuctionsPlus said a line of unjoined Merino ewes will be covering some ground making the journey from Barcaldine, Queensland to Nathalia, Victoria — a 1640km trip. Another line of mixed sex lambs from Mungindi, NSW will be making the trek to Rochester, Victoria which is over 1100km.

The NLRS said lamb quality reduced slightly from previous sales. There were still good numbers of well-finished lambs offered though there were more plainer types. Most lambs were heavy and extra heavy weights. More buyers competed in a dearer market.

The NLRS said heavy and extra heavy weight lamb quality was good. There were more plainer lambs showing signs of dryness. Mainly heavy lambs were penned, with limited numbers of trade weights, but more store lambs compared to the last sale. All the usual buyers operated plus one extra and competition was solid, resulting in a firm to slightly dearer market.