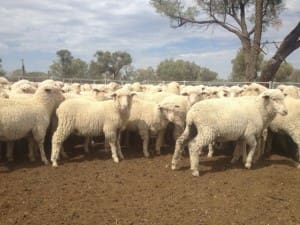 These 16.4kg cwt Dohne lambs at Goodooga NSW sold for $78 on AuctionsPlus this week.

The forced seasonal turn-off of lambs and sheep in NSW is allowing subdued and selective export and domestic processor competition to drag saleyard prices back across Australia mid-week.

To a backdrop of declining stock water and pasture reserves across large areas of central NSW and a growing locust problem, processors are quoting lower skin prices and delays of up to two weeks for producers to consign sheep and lambs over-the-hook, forcing some farmers to off-load into saleyards.

“Most blokes in the game saw that this was coming, so they had them locked them in earlier.”

He said two or three of the major buyers at Wagga this week only needed a truckload of lambs to top up their kills.

But Mr Wilkes said many Wagga region producers were being forced to market lambs, sheep and cattle due to lack of rain-sourced stock water and pasture.

“Recently over the last couple of weeks, water has become an enormous problem.

“Yass and Crookwell and those places have had the best season they’ve ever had, it’s been enormous, but the last two weeks it has completely cut out up there – it’s all turned to the worst.

“The blokes that had the bore water, it has saved their bacon.”

“And it is certainly happening in a big way with cattle to.

“For anything to change we need our numbers to drop dramatically and it’s just not going to happen in the near future because people cannot hold on any longer.”

But he said the market might not be far from the point where processors will need supplies.

“At some point there will be the resistance from the producers to hold off and then the pendulum swings.

Elders NSW livestock sales manager Paul Jameson said the recent Coles forward lamb contract of 580c/kg for late March-April delivery have been filled, with only occasional spot prices available at 560c/kg. He had not heard of any new forward contracts.

“I think processors have adopted a wait-and-see attitude as to where it is going to go.

“I think we will reckon it will be pretty solid.”

He said “underdone” lambs coming onto the market has also put some backward pressure on saleyard prices.

“It is probably reasonably typical if we get to this time of the year and we haven’t had the rain, for sheep and cattle, and we get that dip through these months – we are well and truly seeing it this year.”

Mr Jameson said areas north and north-west of Dubbo are being affected by locusts, which with the dry season will lead to additional forced stock turn-offs including lambs in the next few weeks.

“The locusts have even funnelled down into Wellington and Cowra, but not as thick yet.

“They are also forcing farmers to hold off any thought of sowing oats.”

After the completion of Thursday’s saleyard sales, the National Livestock Reporting Service quoted all national and eastern states daily carcase weight indicators as mostly down. The exceptions were the ESDI for restocker lambs that lifted four cents to 522c/kg and the ES heavy lamb indice that closed firm on 515c/kg.

The ES and national mutton indicators fell 5 cents to 349c/kg.

In NSW at the Central Tabelands Livestock Exchange, Carcoar, on Wednesday, the agents yarded 7900 lambs, 2100 fewer than last week, and 7800 sheep, 300 more.

The NLRS said it was a good quality yarding, with good numbers of heavy weight lambs, limited numbers of trade weights, along with a good selection of light weights suitable for the air freight market and restockers.

The NLRS said there were still a few longer wool young lambs in the yarding of mostly light and trade weight old lambs, along with some well-finished heavy and extra heavy weights. Suitable store lambs were limited in supply. Most of the usual orders operated in a mixed market.

The mutton selection was mixed, but included some well-finished Merino ewes and wethers along with the usual plainer light weights. Prices eased by $2-$4 on average and a little more for over-conditioned heavy weights. Light 2 score ewes made $42-$74, while most medium and heavy weights sold from $56-$100, to average 270-320c/kg cwt. Wethers ranged from $70-$110, to average around 360c/kg.

The NLRS said lamb quality was very good in the trade and heavy weight categories. Trade lambs were in reasonable supply, with good numbers of young supplementary-fed shorn lambs. The market fluctuated significantly throughout the sale, with all buyers factoring into their price margins the considerable decline in skin values.

Well-shaped trade lambs were keenly sought by several domestic processors, while plainer lambs lacking finish or presenting dry in the wool were discounted. The usual domestic and export buyers competed in a very erratic market. Bidding intensified as the market progressed for well-finished heavy trade lambs, aided by stronger demand from some export companies who started buying late in the sale.

The bulk of the heavy trade lambs averaged 515c/kg cwt, reaching a top price of $134.20. Trade lambs, 20-22kg cwt, were keenly sought by a few domestic processors to average $116.90. Light weight plain lambs to the processors sold to weaker demand, with prices $8-$11 cheaper. Well-bred secondary lambs to turn out averaged $103, while lambs to feed on reached a top price of $116.

Heavy export lambs were well-supplied with plenty of lambs weighing in more than 30kg cwt. Competition was erratic throughout the sale with a major processor starting bidding late in the sale, helping to underpin the market. Heavy lambs made from $127-$146 to average 519c/kg cwt. The bulk of the extra heavy lambs sold from $135-$180, averaging 510c/kg.

Mutton quality was mixed, with all weights and grades represented. Merino ewes suitable for the trade were well-supplied and sold $2-$7 cheaper, from $66-$100. Heavy sheep were well-supplied and not all buyers operated fully. Competition was weaker with prices $11-$14 cheaper. Heavy Merino wethers made from $101-$123 to average 402c/kg cwt. There were more heavy crossbred ewes and they sold from $92-$118.

In Victoria at the Hamilton saleyards on Wednesday, the agents yarded 15,291 lambs, 1560 fewer than last week.

The NLRS said the plainer quality yarding of lambs had only a few heavy weight lots. The offering ranged from good condition ideal trade weights to others that lacked finish or were light weight stores. One export buyer was again absent, but one extra domestic processor attended. The rest of the regular buyers were less active and very selective, resulting in a cheaper trend. There were less restockers present, although some active local, SA and Shepparton buyers made purchases.

The NLRS said lamb quality was mixed, but there were some good drafts of trade weight and heavy lambs. The usual buyers operated in a generally cheaper market with trade weight lambs selling $2-$4 easier and heavy lambs from $8-$10 down on last week.

Sheep quality was mostly good. Merinos sold from $2-$5 easier and the crossbred sheep were $10 cheaper. Joined Merino ewes sold to $95 and a pen of first cross ewe lambs made $130.

At the Hamilton saleyards on Thursday, the agents yarded 8697 sheep, 119 fewer than last week.

The NLRS said the yarding contained all grades and weights for the usual buyers, minus one exporter and another not operating. There was a lack of inquiry for the heavier wethers and ewes compared to previous weeks. Restockers purchased some younger Merino sheep and also a few crossbred ewe pens. 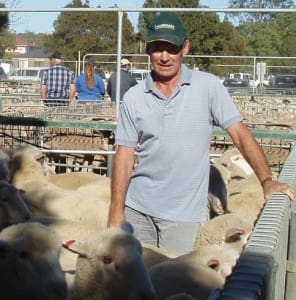 At the Ouyen Livestock Exchange on Thursday, the agents yarded 8030 lambs and 4409 sheep.

Prices for all weights and grades of lambs were $5-$15 cheaper and mutton rates were down $3-$5.

The NLRS said the usual trade and processor buyers attended, but due to the reduced yarding, restockers only had limited choices and made fewer purchases. Prices eased across the whole market.

The NLRS said quality was plain with only moderate numbers of heavy ewes and prime lamb drafts. There were more store and light weight ewe and lamb drafts. Competition remained solid from a depleted field of buyers with no live exporters operating.