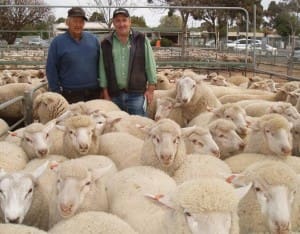 Carcase weight prices edged over 500c/kg at some markets as buyers competed for the best quality medium and heavy trade lambs showing bloom and with good skins, notably at Wagga, Horsham and Ouyen.

MLA’s National Livestock Reporting Service said the Eastern States Trade Lamb Indicator finished on Thursday at 492c/kg, up on cent on Wednesday and the heavy lamb indicator closed at 483c/kg, up also up one cent. The mutton indicator ended on 338c/kg, up two cents.

Eastern states lamb supply increased to 143,035 head for the week to Thursday, up 20 percent on the previous week. The rise was mostly attributed to higher turnoff in NSW and Victoria, as young lambs become more apparent and prices improve, NLRS said.

The NLRS said the fair quality yarding had a good selection of heavy weight new season lambs and a reasonable selection of trade weights. Old lambs were in limited supply.

The 3 and 4 score Merino wethers to slaughter sold from $70-$100. Restockers bought good numbers of young longer wool Merino ewes for $30-$79 and wethers sold for $67.

The NLRS said the plain yarding included some young lambs and a mixed selection of older drafts in most weight categories. With a couple of regular buyers absent, the trend was cheaper although accurate comparisons were difficult on the small numbers. The few young lambs made from $80-$104, to average around 520c/kg cwt. Light old lambs weighing 16-18kg, including a run of Merinos, made $68-$86, while a secondary run of trade weights ranged from $80-$90. A few heavy weights made $93-$125 for most of the old slaughter lambs, to average 425c/kg-460c/kg cwt.

Buyers bid up on big quality yarding at Wagga

The NLRS said new season lambs numbers lifted by 25 percent to about 21,050. Old lamb numbers declined and quality was quite good, with a good portion of the offering shorter skinned lambs showing bloom. All domestic and export buyers attended and most companies operated. There was increased interest from restockers across the young lighter weight lamb category, with buyers from Griffith and the local area.

New season heavy trade lambs regularly made from $119-$130, with bidding strongest for lambs in full bloom. Light and medium weight trade lambs made from $104-$121 to average 510c/kg cwt, with buyers operating on skin values of $7-$9. New season lambs to turnout made $60-$84.20. More light 2 score lambs suitable for restockers and processors were yarded and lambs to slaughter sold from $62.20-$108. The few pens of new season Merino lambs made $65-$110, with several buyers eager acquire the lighter weights.

More medium weight ewes and wethers were offered, with many shorn. Merino ewe mutton sold to steady demand, with prices generally unchanged to $3 dearer. Heavy crossbred ewes were not as keenly contested and prices eased by $5, with heavy grades averaging 298c/kg cwt. Merino wethers were in shorter supply and quality was not the standard of the previous sale, with most categories carrying less condition and skin value, resulting in a cheaper trend of $16 to average 349c/kg cwt.

The NLRS said demand from the current small field of buyers was stronger with most lambs $5-$10 dearer and sheep mainly unchanged to slightly higher. 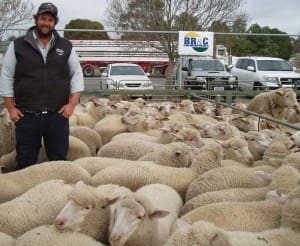 BR&C agent Rory Singleton, with lambs from Kayne Burns, Tempy, that sold for $127.20 at Ouyen on Thursday.

At Ouyen on Thursday, agents yarded 9974 lambs and 1812 mutton, with the Ouyen Livestock Exchange quoting lamb prices overall $6 firmer on the fresher lines.

The NLRS said the smaller yarding was possibly due to wet road conditions. Very few prime trade lambs and only moderate numbers of light trade and store lambs were available. The mutton yarding included reasonable numbers of heavy ewes but was mostly lighter weight lines. Wether, hogget and ram numbers and quality were also limited. All buyers were present but one lamb processor did not operate in a market that was relatively firm for lambs but trended higher for ewe mutton.

Wether prices remained very similar with heavy wethers making $68-$92, with processors paying to a top of $92 for very heavy drafts and select live export sales at $75-$88. Store wethers to feeders and restockers made $53-$85.50, marginally dearer.

Ram prices lifted marginally with ram lambs selling up to $70.50 and young drafts to live export and export feeders making $35-$65. Old rams to processors made $15-$35.