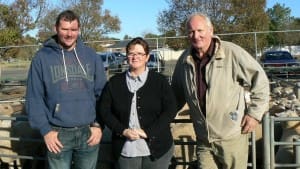 The NLRS said saleyard and direct-to-works prices over the last two weeks have been buoyed by rain across many of the key lamb producing regions in early May and forward contracts put out this week for June delivery have also provided more stability for the market going into winter.

Supermarket chain Coles this week released its July contracts for lamb of 590c/kg for 18-25kg cwt shorn lambs delivered to Gundagai in New South Wales and 600c/kg for deliveries of approved lambs to Brooklyn in Victoria. Coles’ June lamb contracts of 580c/kg at Gundagai and 600c/kg at Brooklyn have been filled.

Saleyard buying interest focussed on lines suitable line to restockers and any well-finished trade and heavy lambs suited to domestic or export orders, with the best lambs in these categories making from 540-600c/kg-plus cwt. At Wagga in New South Wales extra heavy lambs sold to $215 and Mt Gambier sold its first pen of lambs for more than $200, with a processor paying $205 for the estimated 36kg cwt lambs.

In New South Wales at the Central Tablelands Livestock Exchange at Carcoar on Wednesday, the agents yarded 8400 lambs, 2150 more than last week, and 5200 sheep, 1800 more.

The mostly plain quality yarding of mutton had only odd pens of properly finished sheep. Light weight ewes were a little cheaper and the balance were firm. The 2 score ewes sold from $40-$78. The better 3 and 4 score Merinos made $71-$98 and crossbreds sold to $130. Merino wethers sold to $124.

Well-finished grain fed trade lambs ignited the bidding, while dryer longer wool types were avoided by some processors. Generally trade lambs were unchanged to $4 cheaper, averaging 576c/kg cwt. Restockers had the greatest influence over the lighter weight categories, with restockers from Goulburn and Yass driving the market. Lambs returning to the paddock sold up to $19 dearer. Lambs with frame sold at $73-$120. Merino trade lambs sold to solid demand from $106-$145.20, with sales erratic at times.

The NLRS said lamb quality improved for the mixed quality yarding. More buyers attended and most competed keenly in the generally dearer market.

The improved yarding of sheep contained good lines of crossbred and Merino ewes and wethers that sold to consistent competition, with one extra buyer on heavier weight mutton. Sheep prices were generally $5-$10 dearer at times, mostly for the light and heavy mutton, and Merino wethers.

The NLRS said lamb quality was average and most of the regular buyers group operated in the firm-slightly dearer market.

Supplies of good trade weight and heavy lambs were limited, with heavy lambs reaching $190, and the better trade weights selling from $132-$149 to average around 550c/kg. Quality heavy Merino lambs in near-full wool sold to $150 and the medium weights made $97-$130. Restocker activity was limited and they paid to $113.50 for lambs.

At the Ouyen Livestock Exchange on Thursday, the agents yarded 4917 lambs and 790 sheep.

In South Australia at the Mt Gambier saleyards on Wednesday, the agents yarded 1354 lambs and 120 sheep.

The NLRS said a small field of trade and processor buyers attended, but not all were fully active on the mixed quality yarding.

In Western Australia at the Katanning saleyards on Wednesday, the agents yarded 4875 lambs, 125 fewer than last week, and 4800 sheep, 2368 less.

In Queensland at the Warwick saleyards on Wednesday, the agents yarded 1950 lambs and hoggets, and 798 sheep.

The lamb and mutton markets were quoted as firm overall, with better heavier lambs dearer. The top-priced lambs weighing 63.5kg lwt made $167 for J. and J.R. Neal of ‘Taraview’, Tara.