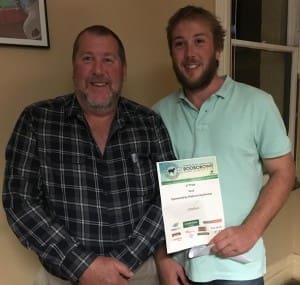 Third placegetters in the TFI Booborowie competition’s stud section were Greg and Rob Hall from the Ulooloo Dohne stud.

The competition has so far raised about $7500 for the Booborowie community with more funds due in from lamb donations.

After a presentation dinner last Friday, organiser Leith Tilley said Merino lambs performed exceptionally well in the competition in which 69 teams of crossbred, Merino, SAMM and Dohne lambs were fed for 60 days in the Saltbush Ag Feedlot.

“Everyone expected the crossbred to well outperform the Merinos, but the top Merino lambs were pretty much equal with the crossbreds,” Mr Tilley said.

The winning teams had the most consistent lambs, but weight gain performance between lambs in teams varied by as much as 50 percent, he said.

“Which highlighted to me the power of using individual identification and record keeping.”

“I reckon that is one of the themes we will focus on next year.”

The top two lambs with the highest carcase value were both Merinos; entered by Gerald Mulligan, $184 value for a 36.3kg carcase, and North Ashrose Merinos, $181 value with a 35.7kg carcase.

“While everyone understands that wool is important, that increased focus on lamb returns has been equally important, if not more so – I think that’s where the studs are going.

“That really reinforces the message that a good Merino is only marginally behind a crossbred, but if you take into consideration the wool cut off Merino lambs and ewes, it is certainly encouraging.”

The top individual value gains from the start of the trial to slaughter were recorded by Glenroy (Poll Dorset 97pc, Tom Riggs (Merino) 85pc and Claughton (SAMM) 85pc. 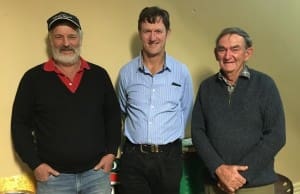 “We believe many lambs plateaued due to the higher than normal average entry weights into the competition and the lambs slowed once they got up in weight.

“Overall we would have expected better average daily growth rates and this is something we will be investigating more,” he said.

“It probably highlighted that once a lamb is ready, it is ready.

“Some of the lambs were nearly ready to go when they entered the feedlot.”

The average live to dressed weight yield for all entries was 47.6pc, with the Merino/SAMM/Dohne entries averaging 46pc and the crossbreds 48.5pc.

Crossbred team entrant Roger Farley from Strathalbyn donated his third prize — tickets to the football — which was auctioned off and raised a further $500 with Toby Cousins from Platinum Livestock buying them. The winner of Sheep Central prize was the Baderloo Merino Stud. John Scott won the $5000 Atlex Stockyards prize.