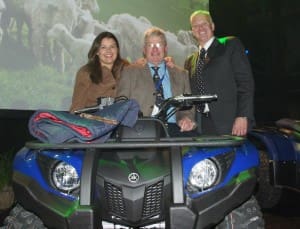 He feeds his lambs well, weighs them all before trucking and ensures that all also have the condition score to meet the requirements of the program.

“When we weigh them up we take a few kilograms off, high and low, to try to get them well within the spec area.

“And when we look at them all, they’ve all got to be ‘mickey mouse’ – you can’t have the weight there and not the right condition score,” Mr Hawkins said.

“It is no good having a big framey lamb with the weight, but he doesn’t kill out very well, so he’s got to wait until he has the weight.”

The SA farmer has been supplying lamb to JBS since about 2009 and his Circle H Farms operations turned off about 7000 lambs this season, including home bred and traded lambs.

Circle H has consigned Poll Dorset, White Suffolk cross lambs out of Dohne, WS-Dohne cross and first cross ewes into JBS. Lambs are dropped on dryland or irrigated pasture, lucerne or other crops in April-May and weaned at 12 weeks. The lambs will either be fattened under centre pivots, dryland or on a feedlot.

“There is a real mixture, there is no real rule there, it’s just whatever we can make a buck out of.”

Despite this variation in lamb source, the Hawkins operation managed a compliance strike rate of 96.5 percent.

“That just blew me apart,” he said.

“Last year we bought lambs and fattened them on grass and they were gone before we had to spend any money on them.

“But normally we buy them in and put them on bean stubbles, but we didn’t even crank the feedlot up this year.”

“We do a lot of that stuff with the crops that we grow and it’s a great discipline to have that happening with our sheep as well.

“To be involved in that you’ve got to keep all your records,” he said.

“A lot of the time that 20c/kg premium brings our price up to the domestic price as long as you can get them in there on the day.”

Mr Hawkins said he doesn’t sell any lambs through saleyards.

“You’ve got no control, whereas when you sell through the meatworks you know exactly how much you are getting.

“You’ve just to get them in the weight range and away you go.”

Mr Hawkins said the inaugural JBS forum and awards dinner in Melbourne was “absolutely brilliant” for communications between processors and farmers.

“Because of what JBS did that day and night, they have gone a long way towards cementing the processor-producer relationship.”

Mr Hawkins said he had tried in the past to get a relationship with other processors, without success.

“A lot of those farmers will now think we will go to JBS before we go anywhere else.”

More than 400 producers celebrate in Melbourne

More than 400 beef and lamb stakeholders engaged in JBS Australia’s Great Southern farm-assured supply chain program gathered to salute their peers when the company held its first Supplier of the Year awards in Melbourne on Friday night.

A glittering awards dinner held at the Crown Casino’s convention centre served as the centrepiece of the event after a day-long conference program exploring the achievements of Great Southern’s progress to date, and where the premium grassfed brand program is going (see this morning’s separate report.)

It was easily the largest commercial brand supply chain event ever staged in Australia, and book-ended a fortnight of engagement between JBS and its suppliers and customers across Eastern Australia.

The company hosted a function for 500 suppliers and other stakeholders during Beef 2015 in Rockhampton a fortnight ago, and has since held large brand showcase events in Brisbane and Melbourne, connecting with hundreds of retail and food service customers. In total, these events have connected with more than 1200 stakeholders across the red meat supply chain.

The JBS Farm Assurance program, the largest of its kind and the only grass-fed multi-species brand program in Australia, now comprises more than 2000 dedicated lamb and beef supplier members  producing high-quality grassfed beef and lamb to strict specifications under the Great Southern and King Island beef brands.

The selection of Friday’s award winners used the new Livestock Datalink facility (see this morning’s separate article) to benchmark Great Southern suppliers on a range of commercially-important attributes, including compliance against carcase specs and weight, spread of kill throughout the year and other performance parameters.

As can be seen in the Top 10 finalists published at the base of this article, the formula in some cases had to go down to four decimal points to define the winners and placegetters, such as was the level of performance at the upper end.

Ultimately there could only be one winner for each species. South Gippsland cattleman Brad Gale, from Ross Farms near Fish Creek was announced as the Beef Producer of the Year, while South Australian lamb producer Wayne Hawkins, from Circle H Farms near Frances, won the corresponding Lamb Supplier of the Year award.

Both were presented with gleaming new $15,000 Yamaha quad-bikes as their major prize.

JBS Southern chief operating officer Sam McConnell paid tribute to the award winners and the entire group of producers for their outstanding commitment to the highest animal welfare and food production standards.

He told the dinner audience that Great Southern was about bridging the gap and building strong and enduring relationships based on trust between producer, processor and end-users.

“We need a sustainable and long-term livestock sector in order to remain relevant and viable and so we are pleased to partner with producers like Brad and Wayne to meet the more discerning demands of the consumer,” he said.

“The JBS Farm Assurance program has been developed by understanding the specific requirements of consumers, customers and producers around the world. We take our hat off to all of our program members who are producing the world’s best, naturally-raised beef and lamb and look forward to continuing to raise the bar of the JBS Farm Assurance program.”

Beef Supplier of the Year award winner Brad Gale from Ross Farm, near Waratah Bay in Victoria’s South Gippsland, was overwhelmed when he was announced as the winner.

He and his family run a breeding/finishing operation based on about 550 cows, with split calving autumn and spring, topped-up with about 350 bought steers each year. All are carried through to JBS Great Southern target weights of 300-360kg.