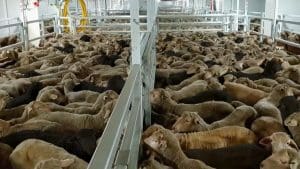 The RSPCA’s altered image from the Awassi Express footage, showing what a 17.5pc stocking density reduction would look like.

NATIONAL animal welfare body RSPCA Australia is calling for a halving of stocking densities on live sheep ships bound for the Middle East.

After 60 Minutes’ release of damning 60 Minutes footage of distressed sheep dead and dying on the Awassi Express and meeting with the Department of Agriculture and Water Resources yesterday, the body also believes Australia’s regulator does not have the legal or regulatory mandate to issue export permits.

“The RSPCA is becoming critically concerned that the regulator has not only failed farmers and the community in the past, but appears unable to perform its role correctly, even under such intense scrutiny.

“It’s very clear why an adequate response to animal welfare concerns in live export has been lacking for so long,” she said.

“Let’s be clear – the job of the regulator should not be to promote, advocate for or facilitate this industry.

“As the regulator, their role is to enforce the regulations as they stand,” Dr Jones said.

“We would strongly emphasise our earlier message – we believe that, given the overwhelming evidence, the Secretary for Agriculture does not have the legal or regulatory mandate to issue another permit for the long-haul live export of sheep.

“The conditions required for this permit can simply not be satisfied,” Dr Jones said.

“We have to keep asking, why are we doing this?

“Why are we going to these extraordinary lengths to facilitate a trade that’s destroying our international reputation, causing thousands of Australian animals to suffer and die, and offers very little actual benefit to farmers?”

Dr Jones said it beggared belief that the ship at the centre of “this scandal” is moored in Fremantle and may yet be issued with a new export permit this week, with minimal additional terms.

“At this stage, we expect the department will ask for a token reduction in stocking density, just one additional stock person on board, and just one departmental observer on board who is paid for by the exporter.

“In other words, the department appears to be still accepting that sheep on a three to four week journey don’t all need to lie down, and don’t need easy access to food and water – which is clearly preposterous,” Dr Jones said.

The Department of Agriculture and Water Resources has proposed a 17.5pc reduction in stocking rates for the proposed Awassi Express voyage, with additional stock person and veterinary staff on board, and regular video reporting requirements.

However, Dr Jones said anyone who has seen the 60 Minutes footage will immediately know these futile measures are like shuffling the deckchairs on the Titanic.

“It simply won’t make a difference — stocking density would need to be at least halved to make any kind of meaningful difference, that’s the fact that’s backed by science,” she said.

“This level of bureaucratic response, given the scale and seriousness of this evidence, is woefully inadequate and, frankly, very alarming.”