YOUNG first cross ewes sold for a Victorian record price of $388 at Rodwell’s Edenhope sale yesterday and ewe lambs made to $340.

The sale was regarded as very strong compared to other recent Victorian sales, with keen repeat buyers paying $40-$50 above last year’s prices to secure known lines.

Edenhope’s $388 price was the national record for a few hours, until 1.5 year-old ewes at Naracoorte in South Australia sold for up to $402 that afternoon.

Rates were especially strong for the later runs of 1-1.5 year-old ewes, sold after the record $388 for 149 August/September 2018 drop October shorn ewes from the Rogers family, Mt Yulong, Telangatuk East. The Mt Yulong ewes were bought by Dartmoor prime lamb producer Charlie Kerr who said he was replacing old ewes about to be sent to market.

“I would rather have ewes than buy ewe lambs.”

Prices for Edenhope’s 1.5 year-old ewes were sold through the top runs and seconds, and generally within a range of $310-$362. Edenhope producer Danny West, with his grandson Hamish, 6, was happy with his average of $265 for 1070 Westwood ewe lambs.

“I’m happy with those prices, we haven’t had a run like that,” Mr West said.

Other ewe lambs suitable for an autumn joining generally made from $230-$310, with the middle and later runs, regarded as possibly too light for joining in the next four months, made very strong rates at $200-$230. 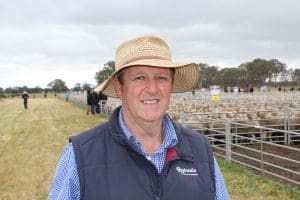 Rodwell’s Edenhope manager David Hanel said the sale was the best held in the yards, with the prices exceeding the previous best price of $302 at the yards.

“We didn’t have a pen (of ewes) under $300 today, which just shows where the industry is.

“And the ewe lambs (at $340) eclipsed the record of two years ago of $276, with lambs from the same vendor, the Dearden family,” he said.

He said buyers came from throughout south-west Victoria, with some South Australian lookers.

“Obviously they are a bit worried about what’s going to happen at Naracoorte and what’s happened at Bendigo, so we have been caught in the middle.

“So it has been fantastic,” Mr Hanel said.

“Our usual buyers have stumped an extra $40-$50 to secure sheep that they have purchased over the years.”

Buyers came from throughout the Wimmera, south-west and central Victoria, and South Australia.