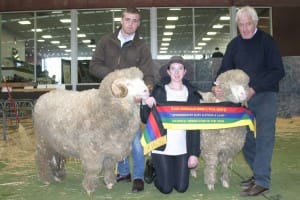 With their 2014 National Pair winners were from left, Sam, Nicole and John Crawford, Rock-Bank Merino stud.

With a superfine ram and his Rock-Bank stud’s grand champion ewe of the at the Australian Sheep and Wool Show last weekend, stud master John Crawford with wife, Rhonda, son Sam and daughter Nicole celebrated a rare record of winnings at the event.

The stud has also won the Supreme Merino Ram of Australia three times and supreme Merino fleece at Bendigo twice, he said.

“Only one stud in Australia has had that sort of strike rate.”

“We are dual purpose too,” he said.

Mr Crawford said the 18.4 micron ram and the 16.4 micron ewe in his winning National pair were four-tooth sheep by the same sire.

“Their father was supreme superfine ram here a few years ago and cut 15kg of 15.3 micron wool.

“The proof is in the pudding,” he said.

Judge Nigel Brumpton from Mitchell, Queensland, said the Rock-Bank pair were the most even of the finalists, structurally and for wool quality.

“They were tremendous big growth sheep for their micron.

“They ewe had an outstanding frame and was nearly the same size as the ram, so they matched very well,” he said.

“They were both very correct structurally with good white superfine wool on them.”

The Grathlyn ram, the supreme Merino exhibit of the show, was tremendous, but the stud’s ewe wasn’t quite of the same calibre, Mr Brumpton said. 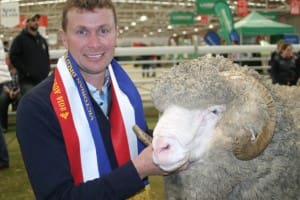 The other state pairs in the competition were Tasmania’s Trefusis stud, the Mulloorie stud from South Australia, Misty Hills stud from Western Australia and Victoria Downs from Queensland.

The winner of the Victorian Ram of the Year at the show was the Glenpaen stud with Hazza, Harry Miller’s supreme champion from the Campbell Town Show in Tasmania in May.