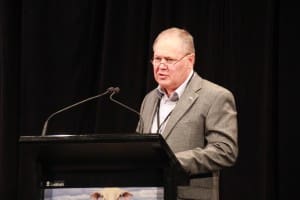 Scenes of high-tech, mechanical agility which would not be out of place in the latest Transformers movie featured in a video shown at Australia’s major sheep industry conference Lambex last week.

The innovation has been adopted for a number of reasons, including to improve workplace safety for employees, to increase accuracy and consistency and to maximise the yield of high value cuts, to reduce handling, improve food safety and extend shelf-life and quality, and to increase the overall efficiency of processing.

Mr Treffone explained that in June 2011 a small delegation from JBS Australia was invited to New Zealand by Dunedin-based firm Scott Technologies to discuss the potential adoption of its “Leap lamb cutting” system in JBS’s Australia’s lamb processing operations.

“We were impressed with the technology but we were also wondering how we could develop a payback model based on what we saw,” Mr Treffone said. 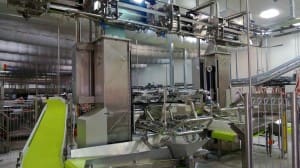 In June 2012, after considerable planning, JBS, in partnership with the Australian Meat Processing Corporation and Meat & Livestock Australia, entered into a project to install Scott’s Leap III primal cutting system and a Leap IV middles processing system at its Bordertown abattoir.

This is a simple overview of how the system works, according to Mr Treffone’s description and video footage shown at Lambex last week:

Mr Treffone said the variation in size, weight and breed of Australian lamb carcases had presented the project with a number of challenges which Scott Technologies has had to deal with.

However, the systems are now operating at full capacity at a constant speed of up to 10 carcases per minute, and are providing cutting accuracy, consistent presentation and quality, and a safer environment with less risks to people, Mr Treffone said.

Mr Treffone told the conference that the successful outcome meant the R&D support on the project, the level of which was not disclosed, had been fully justified.

He said the next generation of robotic processing technology would include forequarter processing, shank tipping, leg boning and lean meat yield prediction.

Asked if the technology has led to cuts in the size of its workforce, Mr Treffone said it had moved labour but in reality had not replaced a lot of labour.