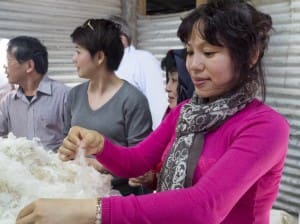 Vietnamese wool processors and brand owners inspect a fleece on a recent tour to Australia.

Vietnam could reduce the Australian wool industry’s reliance on China if a regional free trade agreement goes ahead. Australian Wool Innovation’s July Market Intelligence newsletter said the proposed Trans-Pacific Partnership (TPP) might change the current China-dependant wool pipeline. “China is still by far the largest wool importer, processor and exporter of wool products; however Vietnam’s importance to the wool supply chain has been growing. “The AWI Out of Vietnam project and the ongoing Trans-Pacific Partnership agreement negotiations have also been encouraging further growth through the diversification of regional processing capacity within the wool processing pipeline,” AWI said. “In 2011, only about seven percent of the world’s wool was available to spin into yarn within the TPP region. “The TPP’s duty free rule will give the participating countries (incl. Vietnam and Australia) a competitive advantage over non-TPP countries (China and India) who will have to pay US import taxes, such as a general 16pc import tariff on women’s wool sweaters, which may encourage the increase of wool processing and manufacturing within TPP countries,” AWI said. “As a result, there has been an inflow of investment into Vietnam to increase processing and manufacturing capacities in anticipation of the TPP and the trade advantages expected for all fibres, including cotton and man-made fibres.” Vietnam’s National Textile and Garment Group has committed US$300 million to expand primarily spinning and weaving production and US$104 million to construct a yarn and textile manufacturing plant, not all of this investment is for wool processing. Since 2001, imports of wool apparel from Vietnam into the United States have risen at an annual compound rate of 15 percent to the equivalent of 15.6 million square metres valued at US$136 million. AWI’s Out of Vietnam project now has 50 industry partners. It is targeting in-house training of knitting factories and helping two companies spin wool in Vietnam. “At this point over-reliance on China will be reduced and the cost competitiveness of wool processors will be increased, which is AWI’s ultimate objective,” AWI said. Australian Wool Innovation’s media manager Marius Cuming told sheep producers at the windy Birchip Cropping Group field day on Thursday that Vietnam has discovered wool and fine wool. “They’re competing with China and wanting to produce a better product. “So we are convincing them to use wool, create a better garment, make more money out of it and compete with China on quality, not price.” About 80 per cent of Australian wool currently goes to China for processing, but Mr Cuming said AWI was working with new countries such as China and Russia. “We got a call from Ukraine yesterday, which was quite remarkable, maybe they’re needing a few more uniforms,” he quipped. Mr Marius told the Birchip farmers that the wool market in Australia “looks about as shaky as this marquee.” “We believe that with the Eastern Market Indicator above $10 a kilogram we can keep people in the wool game, but below $10 EMI we are losing them. “At the moment it is hovering around that $10 mark – we are not happy about it and we are doing everything in our power to turn it around the right way.” In the last four years the EMI had averaged 1128 cents, during 2006-2010 it averaged 877 and the mean was 831 cents from 2002-2006, he said. He said AWI was spending $52 million in marketing wool around the world. “To sell a lot of wool you need three things – a cold climate, affluence and you need population. “China of course has had two of those things and now of course they have affluence, and that’s why a lot of our work is happening in China.” He said wild dogs is the “number one issue” holding back the Australian sheep industry.