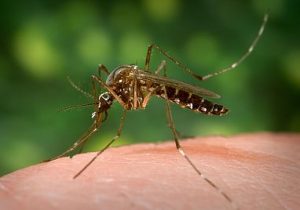 A female Aedes aegypti mosquito seeking out a penetrable site on the skin of its host. Image – James Gathany, CDC.

PEOPLE in towns along the Murray River and in northern Victoria have been warned to protect themselves from mosquitoes after a rise in suspected Japanese encephalitis virus (JEV) cases.

JEV is a mosquito-borne virus that can cause encephalitis in about one percent of cases that become infected.

Most people who contract JEV will have no or very mild symptoms and fully recover but anyone who develops a sudden onset of fever, headache, vomiting as well as seizures or disorientation should see urgent medical attention.

Children aged under five years old and older people who are infected with JEV are at a higher risk of developing more severe illness, such as encephalitis.

Late last week Victoria’s Department of Health said there have been eight suspected human cases of JEV infection in Victoria, including six people who have been hospitalised.

This includes two children under 10 years old and six adults aged between 35 to 75 years old. All cases are awaiting confirmation at this time and several remain in hospital. One is a resident of New South Wales.

The declaration was made under the Emergency Response Plan for Communicable Disease Incidents of National Significance, in consultation with the Australian Health Protection Principal Committee.

“It’s really important for people to protect themselves from mosquito bites, especially anyone who lives, works or plans to visit areas in northern Victoria where mosquitoes are prevalent, especially if they are camping.

“There are some really simple steps people can take, including covering up exposed skin, wearing loose fitting clothing, using repellent and sleeping under mosquito nets if you’re outdoors,” she said.

Evidence of JEV has been discovered in pigs in northern parts of Victoria, as well as New South Wales and southern Queensland within the past month, with human cases now emerging.

People should take steps to limit their exposure to mosquitoes and protect themselves by:

 trying to limit outdoor activity if lots of mosquitoes are about

 using mosquito coils, which can be effective in small outdoor areas where you gather to sit or eat.

More information on Japanese encephalitis is available at https://www.health.vic.gov.au/infectious-diseases/japanese-encephalitis-virus

Health and agriculture departments are working together

Dr Bennett’s declaration followed her giving the National Security Committee of Cabinet a briefing earlier this week on the unfolding situation regarding JEV.

“I have declared the JEV situation a Communicable Disease Incident of National Significance after determining a national approach is required in relation to coordination of health policy, interventions and public messaging,” Dr Bennett said.

“A national working group of communicable disease, vaccine and arbovirus experts has been established to support the response, including mosquito surveillance and control measures and identification of those at direct risk, and for the rollout of vaccines.

“The Australian Government’s health and agriculture departments are working very closely with their state government counterparts to ensure a swift and coordinated response.”

Last Thursday evening, Queensland officials confirmed a human case of JEV in that state. The case had recently travelled in regional parts of the state’s south and is being treated in a Brisbane hospital.

The Department of Health is aware of other cases, in multiple states, of encephalitis of unknown origin that are being investigated for arboviral diseases, including JEV.

JEV mostly occurs in pigs and horses, but can cause disease in people and rarely other animals. Pigs are the focus from a human health perspective as they can infect mosquitoes that can then infect humans. This is not the case with horses.

Humans can become infected with JEV through the bite of an infected mosquito. The virus cannot be transmitted between humans, and it cannot be caught through eating pork or pig products.

Less than 1 per cent of people infected may develop a serious illness such as encephalitis and experience symptoms including neck stiffness, severe headache and coma, and more rarely, permanent neurological complications or death. The vast majority of infected people will show mild or no symptoms at all.

Australia’s Chief Veterinary Officer, Dr Mark Schipp, said the key signs to look out for in pigs are stillborn or weak piglets, some with an impaired nervous system. Piglets can develop encephalitis or wasting, depression or hindlimb paralysis. Adult sows do not typically show signs of disease, he said.

“In horses, many cases show no signs of the disease.

Other signs may include lack of coordination, difficulty swallowing, impaired vision or over-excitement.

“Pig producers are asked to be highly vigilant for signs of this disease and report unexplained pig abortions or stillbirths.

“People working with pigs, even if they’re only a backyard pet or a small herd, should take steps to control mosquitoes, as well as continuing to practice good biosecurity,” he said.

“If you suspect an animal is showing signs of the disease, you must report it via your local veterinarian or the national Emergency Animal Disease Watch Hotline on 1800 675 888.”

To report suspected JEV in pigs or other animals, contact your local veterinarian or call the national Emergency Animal Disease Watch Hotline on 1800 675 888.

For more information on JEV in animals, visit https://www.outbreak.gov.au/current-responses-to-outbreaks/japanese-encephalitis