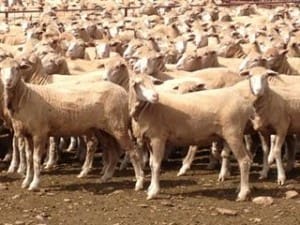 Saleyard lamb prices finished the week on a rising trend last week, with demand from restockers remaining strong for quality light lambs and lines up to 20kg cwt.

MLA’s National Livestock Reporting Service quoted the Eastern States Trade Lamb Indicator as closing the week on 465c/kg cwt, up three cents, and the heavy lamb indicator at 461c/kg cwt, up two cents. The mutton indicator was up one cent to 294c/kg cwt.

The national lamb indicators also improved for the processing categories, but the restocker and light lamb levels dropped and the Merino indicator was unchanged. The lamb indicators were: restocker 472c/kg, down 4 cents; Merino 394c/kg, nc; light 430c/kg, down 1c; trade 462c/kg, up 2c, and; heavy 460c, up 3c. The mutton indicator closed at 291 cents, up one cent.

Sheep and lamb numbers on AuctionsPlus remained static this week at 57,495 head, with improved clearance rates on sheep.

An offering of Merino ewes out of South Australia was the feature of this week’s AuctionsPlus results. The North Ashrose & Mutooroo blood ewes were offered unjoined and just a few weeks off the board at Jamestown. The maidens made $164, and two to four year olds sold from $117.50-$143.50. Elsewhere maiden ewe prices were steady at $83-$150.

The NLRS said quality was very good with the 8000 new season lambs offered in top condition. Old lamb supplies were very limited. The yarding was mainly trade and heavy weight lambs, plus slightly more store lambs suitable for restockers. All the buyers operated and competition was good, resulting in a dearer market.

Old lambs were limited in number with heavy weight lambs holding firm and averaged $104.10 or around 400c/kg cwt.

The NLRS said lamb quality was fair, though reduced slightly from the previous sales. Some good lines of well-finished lambs were offered, along the plainer types and another large run of store lambs. Most of the usual buyers competed in the dearer market.

Mutton numbers lifted with mixed quality Merinos continuing to make up the majority of the offering. Prices remained fairly steady with Merino ewes selling from $72-$100. Crossbreds ranged from $72-$85. Merino wethers sold from $74-$97.

The NLRS said there were several pens of young lambs from the higher rainfall areas of Mansfield and Benalla, and the quality of the new season lambs was very good. The regular buyers operated and prices for lambs sold to slaughter were firm to a few dollars dearer than last week. Some sales of store lambs to restockers were a few dollars cheaper.

The market reached a top of $134 for a pen of young lambs estimated to weigh about 27kg cwt, but with fewer export weight lambs there were only limited sales above $125.

There was restocker competition from the local Goulburn Valley area plus Yarrawonga and Alexandra. They paid from $56-$96 for lambs to go back to the paddock, for an average of about $89. There was also solid processor support for well-conditioned light weight (16-20kg) lambs at $86-$100. The bulk of the young lambs were in the trade weight categories and sold from $108-$124, or an estimated range of 460c/kg-480c/kg cwt for most, with odd sales of well-bred lambs higher. There were only limited pens of export lambs and these averaged an estimated 465c/kg cwt.

The sheep yarding comprised mainly mixed lots of ewes. Heavy first cross ewes sold from $70-$84, while the medium weight ewes made from $45-$65 to average around 245c/kg-250c/kg cwt across the yarding.