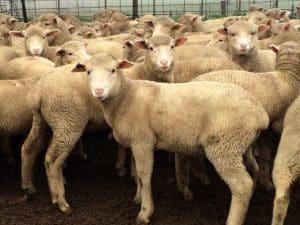 EARLY season sucker lambs are reaching processor grids and AuctionsPlus catalogues in New South Wales at rates above those achieved last year, but could even better prices be coming?

One highlight of the AuctionsPlus listings was the online platform’s first offering of new season suckers this year, with the result indicating a positive outlook for the upcoming lamb season.

A line of 360 unshorn February-March drop Poll Dorset-Merino cross lambs at Cootamundra, New South Wales, weighing 23kg lwt and estimated at 9.5kg cwt with a $6-$7 skin, sold to a restocker for $86.50 or about 830c/kg cwt. The lambs were mostly condition score 1 and 2.

The price paid by a Wagga buyer for the grain-imprinted lambs was $11.50 better than last year’s opening price for the same vendor’s lambs. They will be fed on to be sold as heavy domestic or export lambs

Riverina Livestock Agents partner Tim Drum said he had encouraged the lamb seller James Gooden from “Gidgee” at Brawlin via Cootamundra, to run the young lambs on for a few weeks longer than he did last year to allow crops to get away in the likely buying areas.

“Which probably made the difference of about $10 compared to last year – three weeks ago the crops around here (Wagga) weren’t advanced enough to put lambs on, but they are now.

“It’s really Merino wethers country, he lambs them in the autumn when he’s got a bit of feed and sells them before it gets too cold.”

Mr Drum said he had already been selling January and February-drop lambs weaned on lucerne and topped off on grain in the area to around 23.5kg cwt over the hooks to supermarkets. This was at prices at times about 10c/kg or $2.50 a lamb above 2015 rates.

He expected the normal sucker turn-off fresh off their mothers into saleyards to be later in the Wagga district this year, not before the end of July.

Mr Drum said the Wagga area was running out of finished lambs and the wet weather was making it hard to access properties.

“I think you will find they (the processors) will all be back into it in August expecting to have the lambs here, but there won’t be enough suckers to keep them going.

“I’m tipping August will be the dearest of the lot.”

The NLRS said lamb quality was generally good across all grades. Mainly trade and heavy weights were penned along with a limited supply of store lambs. Not all buyers operated, but competition was solid, allowing the market to hold firm.