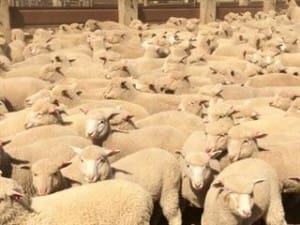 Processors and feedlotters were soundly outbid for even the heavier lambs during the inaugural AuctionsPlus Farmgate Store Lamb Sale last week.

The November 6 sale achieved a 92 percent clearance of the 18,477 head offered, with backgrounders, feedlotters and processors among the 58 active bidders (131 registered), some of whom bought lambs to go back into SA, NSW and Victoria.

Carcase weight rates up to 665c/kg

The top carcase weight price for the sale was 660-665c/kg or $66-$66.50 for O. and B. Blake’s 960 25.1kg lwt (10kg cwt) Poll Dorset cross lambs out of first cross and Coolalee-Merino cross ewes. It was the family’s first offering on AuctionsPlus. The two-three month-old lambs represented the middle run of 4900 bred on the family’s ‘Tarandi’ property north-east of Wagga, this year. The lambs were by Mallee Vista, Follies and Aberdeen rams, and attracted some local bidding, but went to a Finley, NSW, buyer.

The Blakes’ agent, Riverina Stock Agents’ Tim Drum, expected the lambs to make close to their ultimate price with previous buyers driving the bidding on the three lines of 320 lambs.

“People have done well out of them in the past so they have a bit of a reputation.

“It is just dry, if the spring was still going and things were green, he wouldn’t have sold them.”

Mr Drum said he expected the lambs would not be re-sold until mid-winter next year, but the AuctionsPlus sale rates indicated there was a lot of confidence around expected lamb prices next year.

“I don’t think you will have to wait long after Christmas, if that long.

“There are not many fat lambs, I can tell you that much.”

Blake operation based on kilograms of lambs per hectare

Peter Blake said the family always planned to breed more lambs that it could fatten.

“You can send them to different seasons and everybody makes money, and I don’t have a problem with that.”

“They’ve made more per kilogram carcase weight than a fat lamb does,” he said.

“If you are trying to do kilograms of lamb per hectare and millimetres of rain, and not waste anything, you are better off to sell your light lambs.”

The 4900 lambs the Blakes weaned this year were drafted into weight ranges with an auto-drafter. The 18-29kg lwt lambs (average 25kg) were sold on AuctionsPlus last week.

“And we will take out a bit of a tail today, because we want people coming back.”

Any lambs of 29.1kg lwt and heavier have been retained in three weight ranges, 19.1-36kgs, 36.1-41kgs and 41kg-plus. The Blakes expect to sell the heaviest line before Christmas. The lambs under 18kg lwt will marketed in Wagga this week.

Peter’s son, Owen, said he was happy with the AuctionsPlus prices. The family’s selling strategy depended on seasonal conditions.

“We knowingly breed more than we can fatten ourselves, unless we get a wet spring or a flood, where we know we’ve got a mile of feed in front of us.

“We are all about kilograms per hectare – just breed them and sell them.”

Owen said the general confidence in forward lamb prices helped the sale, though there was some uncertainty locally due to the dry season and lack of stock water.

The Merino wether lambs in the AuctionsPlus sale were primarily autumn drop shorn lambs, selling from $47-$80 at average live weights from 34-47kg. Younger woolly lambs out of SA made $29-$39.

Ms Adams said the prices paid and the lamb contracts for December-January delivery indicated there was a lot of confidence in the industry.

“From what I know, a lot of it is based on export demand, which doesn’t look to slowing down anytime soon.

“As long as we can keep those prices at a sustainable level for importing countries and producers.”

AuctionsPlus will be looking to have a follow-up Christmas Lamb Sale on Tuesday December at 9 at noon and she expected some Victorian lambs to be listed.