Restockers buy on talk of 500c/kg for trade lambs 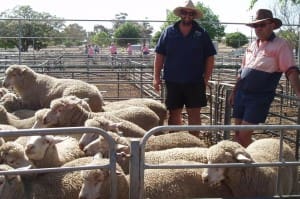 Light and restocker lamb prices lifted in some saleyards across Australia as confidence among restockers continued mid-week.

Lambs required for earlier TFI and ALC contracts for late 2014-early 2015 kills have been filled and mostly sourced. But restockers are still buying, and into heavier categories, underpinned by good prospects of grid prices around 500c/kg cwt for 18-22 kg lambs in the next three weeks and the likelihood of tighter supplies later on.

Agents are being assured that prices around 500c/kg cwt over-the-hooks will be achievable in the next three weeks for good 18-22kg trade lambs suitable for the domestic market.

Trade and heavy lamb prices to processors continued to slip mid-week as carcase yields fall as the weather heats up and processors with good supplies booked direct buy to quality in the saleyards, avoiding dry and seed-affected lines.

The National Livestock Reporting Service quoted the Eastern States Trade Lamb Indicator down two cents after Thursday’s sales, at 458c/kg cwt, and the heavy lamb indicator was at 454c/kg, down one cent. The mutton indicator was 279c/kg cwt, down three cents.

Carcoar prices drop for all but light lambs

In NSW at the Central Tablelands Livestock Exchange near Carcoar on Wednesday, the agents yarded 5120 good quality lambs, 2300 more than last week, and 1560 sheep, 60 more.

The NLRS said there was a good selection of trade and heavy weight new season lambs throughout. Old lambs and Merinos were in limited supply.

Light trade lambs up $5 at Goulburn

The NLRS said the mostly new season lamb offering was of good quality and condition. Old lambs were mixed and included fair numbers of Merinos and Dorpers. The usual buyers competed in a mostly cheaper trade market. Restockers were more active on light and lighter trade weight well-bred lambs, and prices lifted around $5.

The mutton market was mostly around $6 cheaper, but up to $12 lower for light weight and plain condition sheep. Medium and heavy weight ewes and wethers made $50-$97, for carcase prices to average 220c/kg-300c/kg cwt.

Heavy trade lambs down $4 at Wagga

The NLERS said lamb quality was very good, but skin quality declined significantly with more lambs dry in the wool and showing seed contamination. Not all domestic or export buyers attended.

Trade lambs were well-supplied and prices were slightly weaker over all categories. Light trade weight lambs were in reasonable supply and steady competition from restockers contributed to the better finished lambs averaging $98.20. Medium and heavy trade lambs were in greater numbers, with increased supplies of shorn young lambs, and prices were generally $2-$4 cheaper as the heavy trade lambs averaged 472c/kg cwt. Trade weight Merino lambs were in short supply and the better finished drafts suitable for the trade made from $70-$110. Heavy and extra heavy young lambs sold to strong northern competition, with northern processor, TFI Tamworth, the market driver on the better-finished pens. Heavy and extra heavy lambs sold from $119-$131, with the extra heavy lambs averaging 430c/kg cwt.

Lambs suitable to turn out were well-supplied and sold to solid demand, with several buyers purchasing lambs weighing above 18kg cwt. Store orders were in place from Queanbeyan, Forbes and the local area. The better quality second cross lambs to turnout sold from $80-$97.

Mutton numbers were marginally higher and quality was mixed, with all weights and grades represented. Merino ewes suitable for the trade were in reasonable supply and sold to weaker demand, with prices varying depending on skin length and competition. Trade sheep made from $50-$82.20 to average 242c/kg cwt. Heavy mutton were in good numbers and prices were $6-$9 cheaper. Heavy wethers carrying a full skin reached a top price of $105, while most sales ranged from $72-$98.

Landmark livestock manager at Wagga Peter Cabot said until this week his clients’ lambs have been yielding more than 50 percent over-the-hooks, but yields had dropped to 46pc in recent consignments due to the hot weather. This would make some drier saleyard consignments dearer to processors once processed. He said rates for heavier store lambs were firm, but the light store were $5-$8 cheaper.

The NLRS said the usual buyers operated on the average to good quality yarding, with a lot of lambs showing dryness in the skins. As the sale progressed, quality improved, with most lambs generally selling firm on last week’s levels. The better end of the heavy lambs sold to $139.50, at around 470c/kg cwt.

Restockers were again active on the large number of suitable lambs and, paying from $42-$60 for lighter weights and from $67-$91 for heavier lots. These went to Kaniva, local, Ballarat, Shepparton, Finley and Mallee clients. A good quality sheep offering, across all weights and grades, was penned and competition was keen, with most sheep selling to a dearer trend to be $5-$8 up on last week’s levels.

The NLRS said about half the lamb yarding was new season lines. These were mainly light to medium trade 2 and 3 scores from the northern and eastern districts of Hamilton. Most buyers operated in a competitive market for lambs. There was a firm to dearer trend of $3-$5 for mutton.

Light young lambs sold to strong restocker demand, as they made from $51-$66 to average close to 470c/kg cwt.

Light trade 2 and 3 score lambs made from $77-$88. Medium 3 scores sold from $82-$98, while a heavier trade pen estimated at 24kg cwt made $118, with around a $7 skin value. Overall across the weight ranges, the price varied between 450c/kg-470c/kg cwt to average 460c/kg cwt. This was on par with other centres as the district gets ready for the new season lamb selling period due to the influence of the weather.

At the Bendigo saleyards on Thursday, the agents yarded 6165 sheep, 4889 fewer than last week.

The NLRS said agents suggested mutton supplies in the area are starting to tighten. The smaller yarding, plus strong bidding from one major exporter, TFI, meant prices for the lighter grades of Merino sheep rebounded and were $5-$11 dearer for some lines. Buyers were more selective on the heavier and over-conditioned crossbred ewes which averaged about $4 dearer. Some meat buyers dropped out of the auction as the sale progressed due to the stronger prices.

Local agents were again active on the top runs of Merino wethers to go back to the paddock, paying from $72.60 to a market top of $98.60 for wethers offering a wool rebate. The wethers sold to restockers averaged an estimated 300ckg cwt. Processors paid from $61-$78 for Merino wethers to slaughter, and from $61-$78 for the better quality runs of Merino ewes, with these sheep making an estimated 270c/kg-300c/kg cwt. Heavy crossbred ewes sold from $64-$77, improving to around 250c/kg-260c/kg cwt.

Demand for light ewes was strong and there weren’t many sales under $50, with these sheep often making similar carcass prices to the better conditioned and heavier lots. Processor interest in rams remained subdued at $12-$26.

At the Ouyen saleyards on Thursday, the agents yarded 5380 lambs and 1866 sheep.

The reduced number of lambs consisting mainly of trade and store weights that sold to a slightly smaller contingent of processor buyers.

Restockers from the southern Mallee, central Mallee, Sunraysia and Ouyen regions were active, paying up to $84 to return lambs to the paddock. Processors paid to $119.60 for new season lambs.

The generally very good quality yarding of crossbred new season lambs sold to solid bidding from trade and processor buyers. Restockers operated on a few light weight lambs at prices from $57-$73, but trade bought most of the yarding.

Restocker lambs up $6 at Katanning

Ewe mutton and light weight lambs made up the majority of the yarding.

New season lambs were in solid supply with limited prime lamb drafts and more shorn young lambs available. The quality of the lambs was reasonably good, although most lines were in the light and very light weight categories. Ewe weight and wool length continued to decline. Competition remained similar although there was improved restocker interest from the south and eastern coastal areas.

Light lamb to processors and air freight markets made $67-$80, with most marginally dearer. Trade weight lambs sold from $75-$98, to be $3 easier, with heavy weight drafts to a top of $105. Old season lambs were very limited in number and sold at similar prices. Light lambs to restockers and feeders lifted close to $6. Better-framed drafts, including shorn young drafts, made $65-$82, up almost $5, while the lighter lambs including most Merino drafts made $33-$71, up $3-$9.

Ewe prices eased across the categories, largely due to weight and wool length, with light weight drafts making $35-$51, and close to $7 cheaper. The 2 score ewes to processors averaged $57, to be $6 easier, while restockers were active on suitable light conditioned drafts, with prices from $38-$68. Merino ewe hogget sales were firm, with prices from $60-$76 for the better quality drafts.