Restocker lambs on the move

Restocker lamb rates were the big movers on the Australian market last week, with MLA reporting a 95 cent jump in the eastern states indicator to 490 cents.

Related to this were reports at Griffith last week of grass seeds in many lines, sounding a warning for producers, agents, restockers and processors as the season dries off.

Landmark national livestock manager Mark Barton said apart from an overall level of confidence in the state of the lamb market, restocker price drivers currently include the need for professional lamb finishers to secure adequate supplies now to avoid grass seed issues later on. Areas of western NSW and SA, and the Riverina were starting to dry off.

Opportunities to add value to failed crops and homegrown grain were also factors in restocking lamb buying, despite average to below average seasons in many areas of the country, Mr Barton said. The more sophisticated lamb finishing sector that operated on price/kilogram, cost control and with forward contracts, regarded current restocker rates as still good, he said.

Over-the-hook rates aimed at the new season turnoff were unchanged to slightly better in most states last week, except in Western Australia. 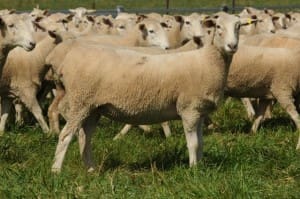 On AuctionsPlus last week, sheep and lamb numbers increased 17,413 to 48,528 with the sheep clearance rate rising above 86 percent for sheep.

Unjoined Merino ewe hogget prices were unchanged on AuctionsPlus this week selling from $62.50 to $140, with the top price buying a line of 13-14 month old Bungaree blood Merino ewes out of Robertstown S.A, averaging 56kg, with an April skin.

Mutton prices were up 13 cents on last week and this was reflected in the sheep sales with processors snapping up a few big lines of heavy mutton. Carcase prices were between 296c/kg-345c to average 329c/kg. The highlight of the week was a line of 1084 three-year-old mid-April shorn Merino wethers from BG and M Stewart, Mount View, Mount Hope near Cobar, that weighed in at 73.5kg live (31.3kg cwt) and sold for $105 though Landmark West Wyalong.

The NLRS said the 7300 new season lambs offered were in better condition than last week The old lambs were mainly well-presented trade and heavyweights. A handy supply of store lambs suitable for the restockers was yarded. All the buyers were present and operating except for one and competition was varied, resulting in a firm to cheaper market.

The NLRS said there were 13,700 fair quality new season lambs penned. There were good numbers of fresh well-finished lambs on offer, but more pens showing seed contamination. The usual buyers competed in a firm to dearer market.

The NLRS said most of yarding was new season lambs from the local Goulburn Valley area. There was slightly less weight and finish in the young lambs compared to the previous sale, but even taking this into account, bidding was fairly patchy and prices eased about $6. The better quality trade weight lambs were the least affected by the softer trend. The usual domestic buyers and one export order operated.

The offering of old season lambs was very mixed and mainly of plain quality, with prices ranging from $76-$105 and tending cheaper than last week.