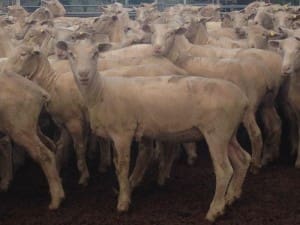 These 350 Poll Dorset cross lambs, 14.4kg cwt and mostly score 1, sold for $103 at Mansfield in Victoria on AuctionsPlus this week.

SALEYARD lamb prices continued to improve this week, with some domestic processors forced into secondary and heavy lines as yardings were further limited by rain in New South Wales.

Bendigo in Victoria and the South Australian Livestock Exchange at Dublin were the only saleyards to increase their lamb offerings this week.

After Tuesday’s saleyard sales, the National Livestock Reporting Service quoted all Eastern States Daily Indicators for lamb and mutton as firm to higher. The lamb ESDIs are: restocker 540c/kg, up 28 cents; Merino 485c/kg, no change; light 517c/kg, up 2c; trade 527c/kg, up 6c; heavy 519c/kg, up 2c. The national trade lamb indicator rose 8 cents to 527c/kg and the heavy indice is on n519c/kg, up 3 cents.

The ESDI and national indicator for mutton both lifted 7 cents to 330c/kg.

Western Australia OTH rates were not available when this article was published.

The NLRS said following the very useful weekend rains sheep and lamb numbers were back considerably on the expected draw. It was a fair to good quality yarding, with some top heavy weight lambs and a reasonable selection of trade weights. Merino lambs were in limited supply.

Good quality trade weight lambs sold to a dearer trend compared to two weeks ago and secondary quality lambs remained firm. Restockers were a little more active following the rain, with a preference for the better quality lots. The market for good quality store lambs was slightly dearer, with the plainer lots experiencing little change. The heavy and extra heavy weight lambs sold $5-$7 dearer and the quality also improved.

The NLRS said lamb quality was fair, with some good lines of well-finished and grain-assisted lambs, and plainer types. Heavy and extra heavy weight lambs were well-supplied. The usual buyers competed in a firm to slightly better market.

Lamb numbers increased as selling resumed after a fortnight’s break due to Anzac Day. Several large lines of lambs came in from the Riverina and north of Mildura, although the best slaughter lambs were mainly from the Mallee district off stubbles or supplemented with grain.

The market trended dearer with most categories gaining $2-$6 compared to the last sale. Extra heavy export lambs sold to $183.60, but well under 500c/kg cwt. The quality of the export lambs varied, with most offered in small and mixed pen lots, that made $150-$166.

Sheep numbers remained tight and a couple of buyers were keen to fill orders, resulting in a dearer trend. Prices were mostly $5-$10 dearer, with the main run of lean trade weight Merino ewes averaging an estimated 345c/kg cwt. Extra heavy crossbred ewes sold from $80-$95 and Merino wethers in a big skin topped at $106.20.

The NLRS said lamb quality was average to good, with all weights and grades offered.

The usual buyers operated keenly in a dearer market, with most lambs $4-$8 dearer and more in places. The better extra heavy lambs sold to $190 and the heavier trade weights made $128-$143 at around 550c/kg cwt. Domestic orders sometimes stepped up to the heavier weights to fill orders.

The NLRS said the mixed quality crossbred and Merino lambs sold to erratic demand from the usual trade and processor buyers. Quality trade weight lambs were eagerly sought by butchers, and feeders and restockers were active on light weight, late-drop crossbreds and Merinos. Light weight crossbred lambs sold up to $17 dearer to feeders, making to $100. Light weight crossbreds bought by processors remained unchanged at $90-$102, or an average of 470c/kg. Light trade weight 4 scores lifted $9 to $112-$125, to average 522c/kg. Heavy trade weights sold from $120-$140, to average 514c/kg. Heavy weights were plentiful and sold from $130-$170, or an average of 514c/kg. Extreme heavy weights made $176-$180.

The NLRS said a small field of trade and processor buyers, and some restockers, were active. Quality was average at best, with weight and condition hard to find among the lambs. Prices struggled to maintain last week’s rates. Light weight crossbred lambs sold from $42-$97 and light weight Merinos made $87-$96. A small number of Merino and crossbred lambs were purchased by restockers for $27-$73. Light weight trade 2 and 3 score lambs sold from $88-$102 and trade weight 3 score lambs made $105-$120, or an average of 520c/kg cwt. Similar Merinos ranging from $97-$116. Heavy lambs mainly sold from $128-$137 and up to $155 in an isolated sale.

The NLRS said lamb quality was again mixed and reflected the time of year. Prime lamb numbers were reasonable, with some good heavy and trade weight lambs. Most were secondary and light weight lambs. Ewe drafts included some good heavy weight drafts along with the lighter conditioned and plain lines. Most of the usual buyers were active, including live export operators on better wethers. There was solid restocker activity on suitable drafts across the categories.

Most ewes sold $4-$5 dearer and more in places. Light ewes made $20-$66, with the 2 score medium weight processor mutton selling from $60-$77, to be close to $5 dearer. Better conditioned and heavy Merino ewes sold from $65-$95 and some very heavy cross bred ewes sold to $107. Mutton prices generally exceeded 300c/kg cwt, with lighter categories making close to 320c/kg.

Restockers were active on lighter conditioned and younger ewe drafts, which were up to $5 dearer at $40-$78.

After some much needed rain over the past few days, the NLRS said lamb numbers were similar at Killafaddy and Powranna on Tuesday, with more store type lambs included. Agents yarded 1000 lambs, 25 more than last week, and 560 sheep, 340 fewer.

Most sheep prices were fully firm and up to $3-$5 dearer. Very light weight ewes made $28-$40, light weights sold for $44-$70, medium weights made $65-$77 and heavy weights sold from $74-$76. A major exporter was back in the market after an absence of a few weeks and combined with strong Victorian competition, made the sale.