Restocker lamb demand continues in saleyards and on AuctionsPlus 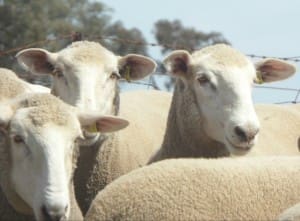 These first cross ewes sold for $189 on AuctionsPlus last week.

Lamb prices generally eased late last week, with only restockers providing any lift when quality and weight suited in saleyards or on AuctionsPlus.

With all states except Victoria looking forward to a holiday yesterday, buyers competed in mostly cheaper saleyard markets on Friday, bringing the NLRS Eastern States Trade Lamb Indicator back one cent to 470c/kg cwt and the heavy lamb indicator to 468c/kg cwt, down four cents. The mutton indicator closed the week on 316c/kg cwt, down two cents.

First cross ewe lambs sold from $83 to $156, and maiden ewes made from $150 to a top of $189 for a well-grown 65.2kg liveweight line out of Narrandera. These were 14-15 month-old late July-shorn Burdo blood ewes from P.&M. Burden, Mt View, Colinroobie, offered through Ray White Rural Narrandera. Composite proven breeders in NSW sold from $96 to $119. Sheep and lamb numbers last week dropped to 38,189 head, 2000 fewer than the previous weekly listing.

Store lamb prices were generally up $8-$10 on AuctionsPlus last week. The 33kg-35kg lines sold from $80 to $88.50, and the 37kg-39kg drafts made $82.50 to a top price for the week of $90 for May drop second crosses weighing 37kg.
Demand for Merino wethers eased, with few sales to report last week. Grown Merino lambs made $40.50 in Tasmania and $65 out of central NSW, and 54kg two to three year olds in southern NSW sold for $75.
Young Merino ewes sold for solid prices to restockers on AuctionsPlus, but did not reach the same highs as last week. Merino ewe maidens sold from $103.50-$140 and unjoined proven breeders made $100-$128. Older lines of ewes attracted processor competition, with 19kg-21kg mutton prices ranging from 259c/kg-263c/kg cwt, including skin.

The NLRS said lamb quality was excellent, particularly the new season lambs, which were in top condition. There were mainly trade and heavy weights and some light lambs suitable for restockers. All the buyers operated, but were subdued in places, resulting in a cheaper market.

The NLRS said quality was mostly good in the mainly new season lamb offering. Light weights were in good numbers, while trade weights were best supplied, along with a handy run of heavy weights. All the usual buyers operated in a cheaper market.

Restocking lambs went against the trend to sell $10-$14 dearer, as buyers acquired a better and mainly heavier lamb.