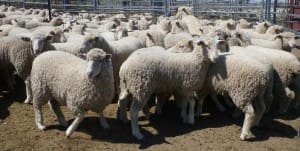 The Merino, light and main trade and heavy lamb ESDIs have also lost between 48-62 cents on levels of a week ago, but the restocker indicator fared best, falling just seven cents for the week.

The restocker ESDI is also 100 cents above its level 12 months ago, indicating continuing producer, feeder and lot feeder confidence in future lamb prices. The other lamb indicators are also still 46-56 cents above levels a year ago, putting the current seasonal price slump in context.

The national trade lamb indicator closed on Friday at 522c/kg, back 3 cents and the heavy lamb indice is on 519c/kg, down 9c.

The EASDI for mutton finished the week on 356c/kg, down 1 cent for the day, but closing 25 cents lower for the week, and 35 cents below its level 12 months ago. The national mutton indicator is on 355c/kg, down 1 cent.

A big jump in sheep and lambs of 17,000 to 60,430 head, did little to dampen demand or prices on AuctionsPlus last week.

With increasing numbers of lambs and also a feature breeder offering in South Australia, the online marketer had its biggest week since March.

Young Merino ewes made up the bulk of a large offering of SA breeders, with maiden ewes across all sales selling from $100-$195 to average $155, a jump of $25 on last week. The top price was for July shorn, 17-month-old Moorundie blood ewes weighing 75kg lwt in Balaklava, SA. A line of 61kg Gum Hill blood ewes at Hoyleton sold not far behind at $191.
Young first cross ewes continue to meet strong demand, with lambs this week making from $90 to a top of $181 for April drop lambs at Loxton. Maiden ewes made $135-$200 to average $178, with the top-priced lot again at Loxton — 15-17 month old ewes weighing 58kg. Proven first cross breeders aged from 2-5 years-old made $117-$151, and young ewes with Poll Dorset lambs at Wellington sold for $204.
New season Merino wether lambs sold from $57-$95, to average $82. A feature run of March/April drop woolly lambs weighing 44kg at Nyngan were the tops and the 35kg lines sold for $85.

The NLRS said lamb quality continued to be good, with new season lambs showing top condition. Mainly trade and heavy weights were penned, along with a reduced supply of old grades and stores suitable for the restockers. All the buyers were present, but not all operated. Competition was easier, resulting in a cheaper market.

The NLRS said quality remained similar to previous sales. There were 7300 new season lambs and a good number were well-finished. Most were trade and heavy weights. Not all the usual buyers were active and there was some competition from restockers in a cheaper market.

In Victoria at the Shepparton saleyards on Friday, the agents yarded 1540 lambs, 651 fewer than last week, and 1000 sheep, 6 more.

The NLRS said 1040 new season lambs were penned. Quality was good on the small runs of heavy trade and heavy new season lambs, but fell away quickly. Old lambs were mixed and included plenty of 1 and 2 score Merino lambs which returned to the paddock. Not all the usual buyers operated in a cheaper market.