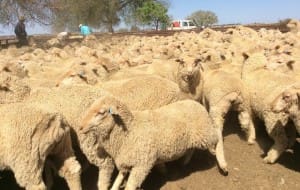 TRADE and heavy lamb prices generally firmed in saleyards mid-week as supply tightened, despite many drafts having seasonal quality issues.

Restockers continue to underpin light and trade weight prices, competing with processors on better lambs over 18kg cwt. Most processors seem to have sufficient intra-state supply not to compete at interstate saleyards.

Has the lamb market bottomed?

Elders Wagga auctioneer Joe Wilks said there had been a panic and glut of lambs and cattle into markets.

“I think the lamb job will slowly improve, a lot of blokes will get on tractors, numbers will cut back a bit and away we go, I would have thought.

“We just had our regular buyers (at Wagga on Thursday), but we probably had 4 or 5 extra restocker buyers that saw the opportunity to buy lambs at store money,” he said.

The restockers were prepared to pay a bit over $100 for 18kg-plus cwt lambs.

“I suppose when they are there the (trade) buyers pick up their game a little bit and don’t want to let them in.”

Mr Wilks said there was still a delay in getting lambs killed, but he expected this to ease up in the near future.

“I think we’ve definitely seen the worst of it.

“People can see over 500c/kg after Christmas, so they’re shearing them or just holding them on.”

With some works offering up to 550c/kg for delivery in January, heavy lambs would be worth more than $140-$150, he said.

The sheep market was also dearer, with Fletcher International at Dubbo now doing two shifts and buying down into Victoria.

NLRS lamb indicators hold firm for all but Merinos

The ESDI for mutton lifted 5 cents to 282c/kg and the national indicator made a similar rise to 283c/kg.

In New South Wales at the Central Tablelands Livestock Exchange near Carcoar, the agents yarded 6700 lambs, 450 more than last week, and 3300 sheep, 900 fewer.

The NLRS said the quality was back with a fair percentage of lambs dry in the skin and lacking finish. Store lambs were in good numbers and there was handy runs of trade and heavy weights.

Sheep quality was good, with plenty having weight and cover. Prices were mostly $2-$5 better. Medium weight ewes ranged from $60-$72 and heavy crossbreds sold to $85. Heavy Merino wethers topped at $95. Most sheep ranged from 290-310c/kg cwt.

There were more new season Merino lambs that sold to processors for $75-$95. Those sold to restockers averaged $66.70. Store lambs sold to slightly weaker demand to average $102.10 for the heavier drafts.

Sheep quality was quite good, with limited supplies of lighter weights. A fair percentage of sheep were shorn or with little skin value. Merino trade sheep made from $52-$74.20 to average 265c/kg cwt. Heavy ewes sold unchanged to $3 dearer at $23-$97.20, averaging 233c/kg. Merino wethers were well-supplied, with the heavier pens making $74-$88.

The NLRS said lamb quality was average to good, with reasonable numbers of trade weight and heavy lambs penned. The usual buyers attended.

Young bare shorn light weight Merino ewes sold to restockers for $20 and those with a fleece made to $78. The best full wool store wethers sold to $110.

Plenty of ewes were offered as the season dries, but strong grazier competition kept prices firm. Light ewes sold for $20-$30. Medium weight bare shorn ewes sold from $30 and those with a 75mm fleece made to $72. The better 3 score bare shorn sheep sold from $42, and those with a fleece made to $77. Restockers and feeders paid $75-$96 for wethers depending on quality and weight. Young rams and wethers were in demand and remained firm. Prime young rams sold from $50-$110 and older rams made $5-$27.

Warwick Selling Agents yarded 1492 lambs and hoggets, and 419 sheep at the weekly sale on Wednesday.

The market was cheaper for all lambs and sheep. Lambs sold to $135 for the Shelley Family Trust of Warwick.