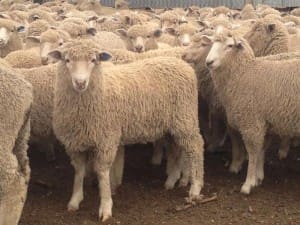 These May-June drop Poll Dorset lambs, 16.8kg cwt and mostly score 2, sold for $99.50 at Euroa in Victoria, on AuctionsPlus this week.

Light lambs with $1-$12 skins also sold well in South Australia, making to 639c/kg at Dublin and to 631c/kg at Naracoorte.

Sheep prices also improved in most saleyards, also buoyed by restocker competition, with prices lifting by up to $10-$15 at Bendigo and by $5-$10 at most other saleyards.

The ESDI and national indicator for mutton both gained 7 cents to close on 322c/kg.

Western Australia’s OTH rates for this week were not available when this report was published.

The NLRS said it was a fair quality yarding, with some reasonable lines of trade weight new season lambs and a large percentage of Merinos. Heavy weight lambs were in limited supply.

All grades were represented in the mixed quality yarding of sheep. The mutton market was solid, with most grades selling at $5-$7 dearer rates. The 2 score ewes sold from $40-$72. The better 3 and 4 score Merinos sold from $68-$119 and crossbred sold-$108. Properly finished Merino wethers sold from $97-$118.

The NLRS said the mixed yarding had more well-finished new season lambs, although the skins on most were drying off. There were few older lambs.

It was mostly a good quality yarding of sheep, with processors and restockers operating on most of the yarding. The prime conditioned ewes and wethers sold up to $10 dearer, with crossbred ewes making $80-$102 and Merino wethers-$92.

The NLRS said good quality trade weight young lambs were well-supplied with overall quality mostly good. There was a limited supply of heavyweight young lambs, with some showing dryness in the skin. All the usual buyers attended.

The availability of a few more sheep allowed buyers-compete with more confidence to fill trucks, resulting in a firm to dearer market trend.

The NLRS said 5900 mixed quality new season lambs were penned. There were some better lines of finished lambs, plainer types and those showing seed contamination. Most of the usual buyers competed in a slightly dearer market.

The NLRS said lamb quality improved, with first draft young lambs from southern grazing areas appearing. The regular buyers attended, but not all operated at capacity.

The market showed a stronger trend of a few dollars dearer for most slaughter lambs, with lightweight store lambs sold to restockers recording the best gains. The market reached a top of $139.60 for export weight young lambs.

Strong restocker completion helped lift prices for lightweight lambs less than 20kg cwt, with the bulk selling to the paddock rather than to processors. Restockers paid to $107 for young lambs, but most sales were from $80-$95. The main restocking category of fat score 2 lambs weighing 12kg-16kg cwt averaged $84, to be $5 dearer. Plainer and lighter lambs in fat score 1 condition sold to restockers gained up to $11 to record the highest estimated carcase weight price in the sale of 579c/kg. The main restocking orders came from Rainbow, Kerang, Birchip, Shepparton, Swan Hill, Wycheproof and the local Bendigo area.

The supply of heavy and well-finished lambs in the yarding remained limited due to the dry season. About 10 pens of heavy lambs weighing from about 25-28kg cwt sold from $131-$139.60. The main drafts of better quality domestic lambs sold from $112-$125. On a carcase basis most sales were in an estimated range of 460-500c/kg, with select pens of very neat trade lambs at 525c/kg cwt at times.

Competition for sheep from processors was stronger and most weight categories of mutton gained $10-$15. Extra heavy crossbred ewes sold from $78-$91. Merino ewes made from $72-$84 and wethers sold to $89. The best trade mutton averaged over 300c/kg cwt.

The NLRS said lamb quality was again good, with a wide selection covering all classes. The usual buyers operated keenly in a mostly firm market, with lambs generally selling unchanged on last week.

All weights and grades of sheep were offered. Most of the regular buyers operated strongly in a dearer market, with most Merino sheep selling firm to $5 better. Heavy crossbred sheep sold $10 better. Restockers paid from $72-$88 for crossbred ewes. Merino wethers also sold to stronger demand.

Dublin lamb prices up to $8

At the South Australian Livestock Exchange at Dublin on Tuesday, the agents yarded 8604 lambs, 976 fewer than last week, and 1960 sheep, 1059 less.

The NLRS said a generally inferior quality yarding of crossbred and Merino lambs sold to erratic but easing competition from the usual trade and processor buyers, although one South Australian processor didn’t operate and there was no supermarket input.

Feeder and restocker buyers were active. However, with the large numbers of store condition lambs available, prices remained unchanged to $8 easier. Light weight 2 score crossbreds remained unchanged and they sold to feeder buyers from $78-$88. Heavier 3 scores sold to feeders eased $8 at $84-$90. Some heavy lambs going on feed sold from $95-$107.

The NLRS said quality was mixed, with some excellent heavy lambs. Large runs of light store lambs were in demand with restockers. More trade and processor buyers were active and prices were generally firm.

Lightweight lambs sold the trade for $78-$99, with restockers mainly paying $71-$98 for large numbers of lambs to grow on. These lambs were firm in price. Lightweight trade 2 and 3 score lambs ranged from $94-$106 to be slightly easier in price.

Trade weight lambs sold from $86-$103, with those going to feeders averaging around 430c/kg and better finished drafts making close to 450c/kg. Heavy lambs sold to $108.50. More shorn lambs were offered and sold at similar prices.

Solid numbers of ewes were available, but quality was mixed with limited number of heavy sheep. There were some good pens of ewe hoggets and young wethers available. Ewe prices were generally firm to $3 dearer, driven by solid restocker interest. Light ewes sold to processors made $30-$53, with the medium weight 2 score ewes making $40-$60 to be $3 dearer. Better conditioned and heavier weight ewes sold from $52-$81, with dearer ewes having high skin values.

Wether competition was limited to restockers and prices eased $5 on heavier drafts. Heavy wethers with longer wool sold to $113 with bare shorn liners making $75-$95. Lighter weight and store wethers sold close to firm and made $55-$85.