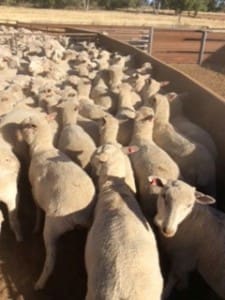 These 18.1kg cwt first cross lambs at Trangie sold for $99 on AuctionsPlus this week.

Restocker and quality trade lamb prices were firm to dearer at the few saleyards selling on April 1 this week, as most centres shut down early for the Easter break.

But overall the National Livestock Reporting Service’s slaughter lamb indicators lost ground over the single selling day, with no sales on Thursday or Friday.

Scanned Merino and first cross ewes were the standout of this week’s sheep sales, she said. Proven 3-5 year-old September-shorn Egelabra Merino breeders scanned 100pc pregnant to the Border Leicester from a late November joining sold from $101-$131 at Coonamble. Scanned crossbred ewes made to $95 for aged ewes and up to $163 for three year old ewes in lamb to the White Suffolk.

Merino wether lambs sold from $42-$64.50, but store lamb numbers have dropped right back, with only a handful of lines selling this week, she said. First and second cross lambs weighing 35kg made $89-$89.50 and 44kg lwt first cross wether lambs sold for $99.

The NLRS said lamb quality was good in the heavy and extra heavy categories. Some of the trade weights were dry in the skin and discounted by buyers. Light lambs were well-supplied and keenly sought after by restockers. All the usual buyers operated in a dearer market.

The NLRS said sheep and lamb quality was plain. Competition was solid from a full field of buyers and prices remained firm for most of the yarding.