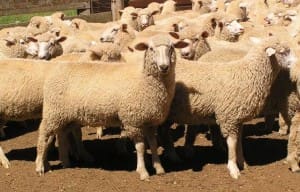 Prices for light slaughter and trade lambs moved to 600c/kg or more for the best lines in several saleyards, including at Wagga, Hamilton and Horsham, helped along by skin values of up to $20 on suitable Merino lines.

Trade and heavy weight prices plateaued on quality, with rates lifting for any quality lines, although the overall quality of a much larger eastern states offering and secondary lamb rates depressed the eastern states daily indicators.

The ESDI for mutton finished up 1 cent to 312c/kg and the national indicator was down 2 cents to 313c/kg.

In New South Wales at the Central Tablelands Livestock Exchange at Carcoar on Wednesday, the agents yarded 6100 lambs, 150 fewer than last week, and 5750 sheep, 2450 more.

The NLRS said there was a good selection of shorn lambs and only limited numbers of well-finished new season lambs. There were a good percentage of lighter weights to suit the restockers.

The NLRS said lamb quality was outstanding in the classic summer yarding, which had plenty of grain-fed lambs over 25kg cwt. Medium and heavy trade weight lambs were limited in each agent’s run and quality was mostly very good. Light weight trade lambs were well supplied and sold to steady demand from domestic processors and feedlot buyers.

Lighter weight lambs suitable to restock or feed-on were in short supply and store orders were plentiful. New season trade lambs were limited, making from $113-$148. The better-finished lambs were shorn, selling from $131-$154 to average 569c/kg cwt. Shorn light trade lambs sold to fluctuating price trends, easing $2. Light lambs sold to slaughter were in short supply, contributing to a dearer trend of $4-$5. Merino trade lambs sold to keen competition at $114-$135. Lambs for restocking and to feed on sold to stronger demand after widespread rain, with prices lifting $10.

In Victoria at the Hamilton saleyards on Wednesday, the agents yarded 14,518 lambs, 2554 more than last week.

The NLRS said there was a larger yarding of lambs on a much-needed rain soaked day at Hamilton. Some good quality heavy and medium trade weights were supplied, and more light and store grades of well-bred lambs. Competition was strong throughout the sale, with all processors attending but not all operating.

The NLRS said lamb quality was good, with good numbers of well-presented trade weight and heavy shorn lambs. Most of the usual buying group attended and operated keenly in a dearer market.

In South Australia at the Mt Gambier saleyards on Wednesday, the agents yarded 2060 lambs, 770 more than last week, and 741 sheep, 343 more.

The NLRS said a plain to good quality yarding of lambs was offered to a small field of processors and keen restockers.

The NLRS said it was mixed quality yarding of sheep and lambs. Lamb and mutton prices were up and prices were firm on all other categories. All the usual buyers attended, with graziers bidding on the store lines.

Restockers paid from $31-$57 for plain light store young Merino ewes. Young wethers sold from $35 for light weights up to $85 for the better quality pens. Trade hoggets made $62-$74.

In Queensland at the Warwick saleyards, the agents yarded 1587 lambs and hoggets, and 920 sheep.

In a larger yarding of sheep and lambs, the market was fully firm on last week’s rates. Crossbred lambs weighing 58.3 Kg lwt topped the market at $143 for L. Prickard of Warwick.