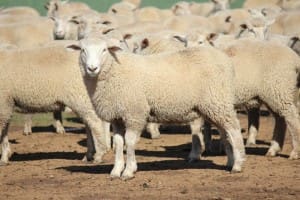 RESTOCKER and light slaughter lamb prices lifted in eastern states saleyards early this week after the first forward prices for the season were released by Thomas Foods International last Friday.

Trade and heavy weight lamb rates fell for all but the better quality new season and old draft lines in eastern states saleyards.

Buyers are able to be more selective on old lambs, plainer suckers and Merinos as the percentage of new season offerings in some NSW saleyards approaches 30 percent of lamb yardings. Mutton rates were firm to slightly cheaper, according to quality.

New season lambs sell up to 700c/kg at Forbes

After the close of Tuesday’s saleyard sales, the NLRS’ Eastern States Daily Indicators for restocker and light slaughter lambs showed the biggest increases.

The NLRS said it was a good quality yarding with a good number of heavy weight lambs, along with a reasonable selection of trade weight and new season lambs. Merino lambs were also well-supplied.

The NLRS said the quality of the 2800 new season lambs was good, although there were a few pens of lambs lacking finish which were passed in. Old lamb quality was plainer, with heavy lambs best supplied. Not all the usual buyers operated in a cheaper market.

The NLRS said the quality of the lambs was fair to good and included about half a dozen pens of new season young lambs. The usual buyers attended and there was some restocker activity, although that was mostly restricted to young first cross ewes.

Well-finished young lambs suitable to the trade sold on a firm to slightly dearer market trend, with most purchased by local butcher orders. The trade weight old lambs sold to a slightly cheaper trend. Heavy weight lambs also saw a marginally cheaper market trend. There was some discounting for secondary quality lambs in all weight categories.

Some very well-finished medium and heavy weight sheep were penned. The medium weights sold $1-$6 dearer. Heavy sheep also sold to a dearer trend and included some pens of young sheep.

The NLRS said lamb quality reduced slightly, with more plainer and rougher lambs. The usual buyers competed in a market that held firm for the better lambs, but was cheaper for the plainer secondary types. Quality was mixed in the 9000 new season lambs.

The NLRS said there were good numbers of light and trade weight lambs, but fewer heavy weights. Quality was good, although there were a few pens of plain lambs and more shorn lambs offered. Prices varied and quality had some influence, but overall the market changed little.

The sheep were mostly mainly ewes, with a few pens of wethers. Quality was fairly good, with mainly light and medium weight sheep offered. It was a generally firm market.

The NLRS said the supply of old lambs continued to decline, but an increase in new season lambs meant overall numbers remained similar to a week ago. More sheep were offered, dominated by shorn ewes, amid reports many farmers are now weaning lambs. All the regular buyers attended, but not all competed to capacity in the lamb or sheep markets. Lamb quality was very mixed and bidding favoured the limited supply of well-finished trade and export weight lambs, which sold firm to dearer in places.

Secondary slaughter crossbred and Merino lambs under about 22kg cwt sold $8-$20 easier. Very small and light lambs suiting restocker orders averaged dearer. The market reached a top of $202 for heavy export lambs with an estimated carcase weight of 32kg. The best of the 23kg new season lambs sold to $158. Several bigger lines of light weight Merino lambs which sold to restockers at $38-$56, while the crossbred lambs sold back to the paddock tended to be smaller and younger types that made $48-$64. Secondary lambs in the light kill and trade weight categories were cheaper, with most sales from $70-$125, depending on weight and quality. The better presented lambs suiting supermarkets and top-end domestic orders mostly sold from $140-$160, at an estimated 570-605c/kg cwt.

The NLRS said the mixed quality crossbred and Merino lambs sold to generally easing competition from the usual trade and processor buyers. Fewer new seasons lambs were yarded and they generally lacked the polish of last week’s offering. Feeders and restockers were most prominent on the many light weights. The best quality new seasons crossbreds sold to stronger trade competition with the inclusion of one supermarket operator who added some impetus to prices.

The NLRS said lamb quality was mixed, with fewer trade and processor buyers, but prices generally improved. Restockers had only a limited impact.

The NLRS said numbers nearly halved after last week’s solid rain across most of the drawing area. Lamb quality was very plain, with only a few pens of prime lambs. Competition remained firm, with most of the buyers present, though some were not active.

Light store lambs sold to restockers for $29-$58, with most being Merino drafts. Light lamb suitable for air freight processors and restockers made $55-$95 to be close to $5 dearer. Trade lambs, mostly secondary drafts, made $85-$122 and were marginally dearer due to supply. Better drafts averaged close to 510c/kg, with the plainer drafts from 440-500c/kg cwt. Heavy lambs made up to $126, or close to 540c/kg.

Ewe mutton was moderately supplied and plainer in quality, with limited numbers of well-conditioned ewes. Ewe mutton prices were marginally dearer and there were solid numbers of cross breed ewes, mostly Dorper cross. Light weight drafts made $40-$55. The 2 score mutton sold to processors for $63-$73, to be $2 dearer at 310c/kg cwt. Better conditioned and heavy weight ewes made $65-$95 to remain firm. Restockers purchased suitable drafts at slightly dearer prices, ranging from $45-$85.

Wether drafts sold mostly to feeders and restockers, with some heavier drafts to processors. Heavy weight drafts made $75-$89, to be close to firm. Lighter and store drafts sold $5 easier at $58-$80. Rams sold well, mostly to live export and processors.

Live export orders for rams kept these buoyant, but other prices were difficult to trend due to the numbers and quality. Ram lambs made $80-$110, with suitable young rams to live export making $50-$87. Old rams sold to processors for mostly $50-$75.