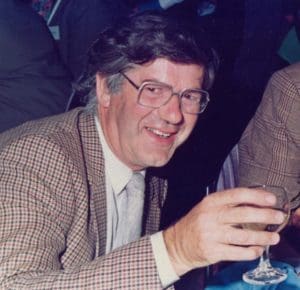 When I received notice of a special general meeting of the Grazier’s Investment Company to be held on October 11 this year with the purpose of proposing a voluntary wind up the company, I was prompted to reflect on the contribution made by Vanne Trompf, a wool grower from Dunkeld in south west Victoria to the GIC in particular and more broadly, to the Australian wool industry.

Vanne who died on November 27, 2016, and attended the GIC annual general meeting every year. He always studied the accounts assiduously prior to the AGM, so that he would be well prepared to ask questions of the chairman, Barry Walker O.A.M.

Vanne had two principal interests in GIC. The first being the residue of the assets and liabilities of previous wool bodies and how the International Wool Secretariat should be managed to give the best outcome to wool growers. And secondly, in the event of the company winding up with substantial surplus capital, this capital should be utilized as the nucleus for a new promotion and research organization free of statutory taxes and associated politics. In other words, a company owned and managed by growers for growers.

Vanne Trompf was far-seeing and erudite

GIC chairman Barry Walker, having first met Vanne at an AWRAP annual general meeting in 1996 in Melbourne, recently said of Vanne: “Vanne held an important place within my understanding of the Australian wool industry. Vanne was always his own man, intelligent, far-seeing, erudite and above all, always a polite gentleman prepared to put his views in public….he had a lifelong love and commitment to a wool industry model with equal opportunity for all wool growers from the smallest to the largest. Despite the zigzag of the wool industry and its politics, he always remained true to his belief in fairness and opportunity for all, but with the proviso that the industry be independent of government assistance or interference.”

In 1977 at 39 years of age, Vanne and his wife Judy, along with their young family, settled on “Bunnugal”; a farm they developed near Dunkeld in the foothills of the Grampians. Vanne had come to farming after a successful career in architecture. His many achievements included designing a hospital and girl’s boarding school in Nepal, a technical college in Worcester, UK, college housing in Boston, USA and many public buildings in Victoria and homes in the Western District.

At a much earlier age, however, he had come into contact with someone who was to become an international figure in the wool industry. Vanne attended Wesley College in St Kilda Rd, Prahran. On most days he and his brother Garry were taken to school in the family Buick by their father William Henry Trompf from their home in Sassafras in the Dandenongs. Vanne’s’ father, was the proprietor of Goodlass Wall and Co a paint company based in Collingwood and by chance employed a young man by the name of Bill Vines. Vines went on to work for Berger’s Paints and eventually, the International Wool Secretariat (IWS) in London.

The angry young man in the back row

When the Australian Wool Reserve Price Scheme collapsed in January 1991, Vanne’s agile mind was well-equipped to ponder the shenanigans of the Australian Wool Corporation, the IWS and the Wool Council of Australia. He often discussed these issues with me, along with his impatience in not being able to get his fellow wool growers to understand where the industry was heading. Like many other producers at the time; however, I was more interested in commercial wool pursuits rather than the politics of the industry. Because this obituary focuses on Vanne’s involvement in the wool industry, I invited Lynne Johnston, who worked closely with him and others of the same ilk during those tumultuous years to contribute her recollections of Vanne. Lynne is a past chairman of the wool committee of the Pastoralists and Graziers Association of WA and a member of that organization’s executive board. Lynne wrote of Vanne:

“The ‘angry young man in the back row’ — these were the words, Alec Morrison, former chairman of the Australian Wool Research and Promotion Corporation, used when acknowledging Vanne Trompf at the 1998 AWRAP AGM. Once again, Vanne was trying to inject some serious thought and intellectual rigor into a meeting of wool growers. On this occasion it was an attempt to institute a Productivity Commission analysis of the economic and business performance of AWRAP at the 1998 AGM. As on many previous occasions, it was a vain attempt.

Later that day, however, Alec Morrison, always a true gentleman, was given to temper his words. The meeting had ended with the passing of a vote of no confidence in the board, thus ending the tenure of the chairman and his board of directors. As the meeting dispersed, Alec approached Vanne and thanked him for all that he (Vanne) had done in the interests of the industry and his fellow growers.

That memorable meeting was neither the first nor the last time that this ‘angry young man’ would speak up. It did not matter whether it was a meeting of wool growers, the church synod or a local council meeting; he was fearless in his prosecution of the truth. At the 1992 Australian Wool Corporation (Mk 2) AGM, he proposed a motion of no confidence in that organization’s board and almost pulled it off. Although the motion was defeated, it was noted by stakeholders that under the rules of the corporation, had the matter in question been the subject of a motion proposed by the corporation, the votes counted in favour of the motion would have sufficed.

When Vanne joined the wool industry, like many of his peers, he did not think much about the Reserve Price Scheme and wool tax, but simply went along with it. He accepted it as an existential part of the industry; an historical institution with a price support component of the wool tax that was meant to revolve every three years. What was wrong with that, he thought; if it gave people some sense of security? That was until the revolving fund stopped revolving.

Vanne telephoned the AWC and demanded to know where his money was. He could not get an answer and it was then that he discovered that this multi-million dollar corporation did not even have a full-time chairman. To his considerable alarm he found that this huge organization, funded by statutory taxes demanded from wool growers and charged with managing the wool industry and therefore the lives and financial future of those woolgrowers, apparently only warranted a part-time chairman.

Vanne decided he had better get interested in what was going on. He joined the Victorian Farmers Federation and it wasn’t long before he made his way through the various levels from branch to district council and then state council, eventually being asked to join the VFF Wool Council representation. In his words, it was there that he finally discovered the real situation.

By late 1990, the RPS was on life support with a stockpile of 4.5 million bales and a corporation continuing to buy 70 percent of the Australian clip. In December of that year, at a meeting in Sydney, a group of growers, brokers, merchants and other interested parties from all wool-producing states  formed the Wool Marketing Reform Group. Led by Lynne Johnston, Jim Maple-Brown and Andy Stoeckel, the group set itself the challenge of implementing the recommendations of Stoeckel’s Centre for International Economics report, Wool Into the 21st Century. Among its key supporters at that meeting was a Western Victorian wool grower’s group represented by Susie Clark and Vanne Trompf. Vanne threw himself into the challenge with his usual enthusiasm and intellectual rigor (Charles Massy, Breaking the Sheep’s Back, 2011).

According to Dr. Bob Richardson, General Manager of the Australian Wool Corporation and CEO of Wool International, the growers did not own the stockpile and the Commonwealth Auditor General declared that neither did the Commonwealth own the debt.

Vanne’s research revealed that when all debts were paid it was highly likely that there would be very little left for the growers. While Ross Garnaut, (Structuring for Global Realities, Report of the Wool Industry Review Committee, 1993), argued for some upside for the growers in return for their contribution to debt reduction through wool tax, the reality was that the growers were liable for all debt contingent to the IWS employees’ superannuation fund. Vanne discovered that this contingent liability had not been backed up and furthermore, he was flabbergasted to find out that the liability was not just for the term of employment, but for the employee’s lifetime.

Unlike most members of industry committees and councils, particularly new members, Vanne never succumbed to prevailing groupthink or popular ideology. He thought deeply about issues, undertook comprehensive research into the wool and wider agricultural industry in historical and topical terms, writing many articles for rural journals and submissions to Senate Committees (Rural and Regional Affairs) as well as various industry inquiries. In his submission to the 1999 Australian Wool Industry Future Directions Taskforce, (chairman, Ian McLachlan) Vanne traced the history of the wool industry back as far as 1840, and in so doing captured the issue central to the parlous state of the Australian Wool Industry:

The persistent urge to return to the employment of unreliable solutions to ill-defined problem is symptomatic of the underlying malaise confronting the Australian wool industry…. endemic dependency on intermediaries, legislative fiats, price stabilization and control, buffer stock schemes, compulsory levies, statutory marketing authorities, generic promotion, publicly funded research and promotion and endless reviews and inquiries. A dependency that has become so entrenched and addictive over time that it is institutionalized and attracted, like moths to a light, a large number of followers — government at all levels, quangos, regulatory bodies and a host of sycophants – who have contributed to compounding the effect, making the dependency almost impossible to reduce or eliminate (Vanne Trompf, submission to Australian Wool Industry Future Directions Taskforce, 1999).

Trompf the loner was seen as a rebel

Vanne was not one to conform, often being seen as a bit of a rebel. He was, in his words, a bit of a loner. On one occasion, he stood for the position of treasurer of the VFF on a platform of a need for organizational and industry change, but heaved a great sigh of relief when he lost by just seven votes. As he said, there was always pressure on him to conform and he realized, in such a position, the pressure would be even greater. In the face of cant and outright stupidity, that was something he found impossible to do, even when confronted by the wrath of the Bishop of Ballarat at a church synod meeting (Interview, 2015).

At the 1996 Launceston meeting of the Wool Council of Australia, as the PGA delegate, I was verbally assaulted in a well-planned and abusive tirade by the chairman of Wool International, Dick Warburton, for daring to question the processes and motives of Wool International. Vanne Trompf was the only member of the VFF delegation and one of only two delegates out of the full cohort of 20, who did not join in a raucous and well-orchestrated standing ovation for Warburton following his outrageous attack. I will forever remember Vanne with great fondness and gratitude, as a true gentleman of quiet dignity, great integrity, courage and decency”. (Lynne Johnston, 2017)

Twenty years ago this month, October 1997 Vanne was involved in the publication of a book titled – “Which half?- an anthology of views on the value of promotion”. The Hamilton VFF District Council Wool Committee of which Vanne was the secretary published this anthology, with contributions from more than 40 organizations and individuals. Today, as the latest batch of statutory institutions appear to be moving towards creating yet another nemesis for the industry, “Which half?” makes salutary reading and raises the question ‘Where are today’s Vanne Trompfs?’