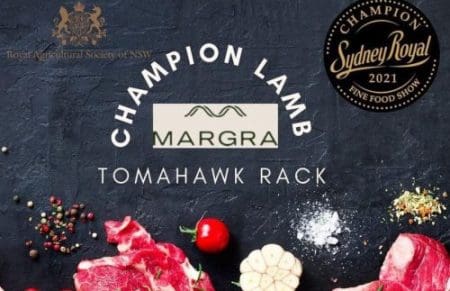 The brand was recently crowned champion lamb at the Sydney Royal Fine Food Show and its micro-marbled finish cut with a low-fat melting point has also enjoyed success at restaurants in Sydney, Melbourne, Singapore, Dubai and Los Angeles, according to Tattykeel.

JCU animal geneticist and nutritionist Associate Professor Aduli Malau-Aduli and his team of researchers will work with Tattykeel to develop a genetic test for their premium Margra lamb.

“We intend to provide farmers at the farmgate level with some form of a test where they can identify animals that carry a natural genetic ability to produce meat-eating quality characteristics.

“A lot of the tools that are out there are based on estimated breeding value, but this will be based on actual eating quality indices that have been tested in the laboratory that we can then link to the DNA of the particular animal,” Prof Malau-Aduli said.

The project is supported by a Science and Industry Endowment Fund (SIEF) Ross Metcalf STEM+ Business Fellowship grant administered by CSIRO, from which JCU will receive more than $450,000 over two years to develop the certification standard.

Through the support of Tattykeel’s funding and the matching grant, early-career research fellow Dr John Otto will be allocated to Tattykeel full-time for two years and will be supervised by Prof Malau-Aduli.

“We’ve been involved in testing their animals, assessing the parental generations and subsequent composites that come out of that to be able to tell them what the intra-muscular fat content and fat melting point is.

“In the area of livestock agriculture, JCU has an important role to play, particularly in giving farmers advice on genetics, nutrition and a choice of animals that will meet market specifications,” Prof Malau-Aduli said.

Mr Gilmore said a lower fat melting point, high Omega 3 fatty acids and high intra-muscular fat had been crucial to success of the Margra brand, which had been achieved through Tattykeel’s collaboration with JCU.

“From the tests that we’ve been doing and following generation after generation, we are narrowing the bell curve on genetic variation.

“If you’re looking for eating quality in meat, it has to be controlled genetically before you put the environmental factors in,” he said.

“We’re not interested in estimations and Aduli is of the same belief. You need real data.”

Mr Gilmore said extensive testing carried out by Prof Malau-Aduli and his team had helped narrow the variation of the fat melting point in Margra lamb to between just 30 and 36 degrees.

“The lamb market situation is a little like Wagyu beef.

“Everyone knows Wagyu is a premium meat but there are certain brands where you are almost guaranteed you’ll get high eating quality because they’ve done their testing, the feed regimes are right and they have control of the breeding through genetics,” Mr Gilmore said.

“The Margra brand is the very best of the Australian White breed because it’s from tested animals and we know what it’s doing.

“At least 80 percent of the industry come directly to us to buy their genetics.”

CSIRO SME business manager Jason Barkla said the partnership between JCU and Tattykeel was an ideal fit for the fellowship program.

“I think the key will be to allow Tattykeel to do a deep dive with JCU and this program helps to de-risk larger scale projects like this.

“It’s going to give Tattykeel an opportunity to do something really ground-breaking that will grow their market position and hopefully, take an offering to the world,” he said.

“JCU will be able to benefit from that long term relationship and take that learning to leverage other industry relationships as well.”

“These projects open up whole new horizons for not only the participating businesses and universities, but the early-career research fellows involved.”