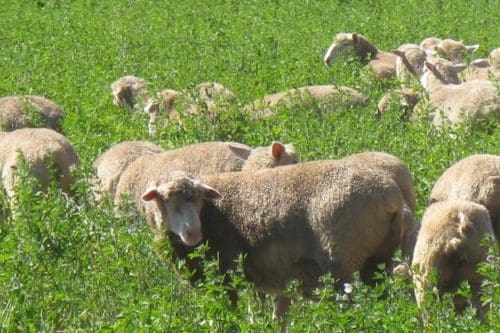 UNIVERSITY of Melbourne researchers have discovered that sheep love warm crispy lucerne fresh out of the microwave.

Forage hay is the conserved form of roughage, mostly used in sheep’s diet during drought in Summer and Winter. However, its use contributes mainly to maintenance due to comparatively lower digestibility than fresh forage. Mr Shishir said the lucerne hay was heated to 85-90 degrees Celsius for 240 seconds and the wheat hay for 120 seconds.

“We treated approximately 600 kg hay for this trial.

Microwave treatment made the lucerne hay crispy “and sheep loved it,” he said.

In the case of microwave-treated wheat, the taste was moderately strong and the difference in feed intake was insignificant.

Mr Shishir said microwave heat treatment is a non-ionic electromagnetic processing technology that is quick, energy-efficient, and safer to handle.

“Based on our literature study and understanding, we have developed a hypothesis that microwave energy interacts with available inter and intracellular water.

“Eventually it converts them into steam and creates pressure in the cell wall that leads to cellular rupture causes microstructure destruction at the cellular level,” he said.

“Therefore, the accessibility to cell nutrients might be increased.”

Dr Cheng, the principal supervisor of Mr Shishir, said they had done some electron microscopic imaging of microwave-treated and non-treated hays.

“The result suggested that the hypothesis of microstructure destruction due to microwave heat treatment is visible and significantly higher than the non-treated one,” he said.

“If you consider small numbers of sheep, the profit improvement due to feeding microwave-treated lucerne hay looks minimal, but the importance can be more visible when applied on farm scale, which is possible with higher microwave capacity,” Dr Cheng said.

The research group believes that more trials are needed for further validation of the findings.

“Despite this study showing microwave heat treatment to be effective for improving forage hay dry matter intake and digestibility, a large number of trials is needed for further validation.

“However, this PhD project showed a path for future research in this area, particularly in microwave time and power selection,” he said.

Mr Shishir said the microwave work is initial stage research. However, in a previous study led by associate Professor Brodie, a 25kg bag of lucerne hay was microwaved and a simple economic analysis showed that microwave treatment could provide more profit. Click here to read the published paper on this trial.