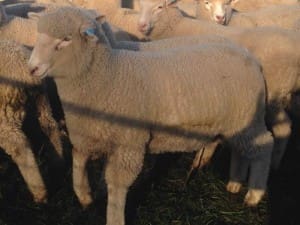 With most processors not pushed for supplies from saleyards or direct sales, new season lamb prices fell by up to $15 at the Tamworth saleyards, but generally dropped $3-$5.

Restockers were also more active in saleyards early this week on light and Merino lambs, helping the Eastern States Daily Indicator for restocking lambs to lift 2 cents to 597c/kg on Tuesday.

Brian Unthank Rodwells auctioneer at Corowa Peter Ellis said lamb prices were $10-$15 cheaper despite the reduce supply, though all the major processors attended the sale.

“We saw the start of restockers coming in to the market.”

He said lamb supply strengthened last week and processors weren’t as forced to get numbers early this week.

“After the extreme rates of last week, it was back to still very, very good rates.

“I think few more lambs have gone over the hooks, but give it two weeks and I think you will see the supply increase around us for sure.”

Forbes agent, Kevin Miller of Miller, Whitty Lennon and Co. said an easing of lamb prices happens annually at this time of the year, but prices were well in front of 2014 prices during the same period.

“Everybody has got to clap more than feel bad about it.”

“What will happen from now on is it will get warmer and the southern yards will start yarding more numbers and the supply is going to increase across the board.”

New season lamb rates peaking above 605c/kg at all weights

After Tuesday’s saleyard sales, the National Livestock Reporting Service’s Eastern States Daily Indicators for lambs were: restocker 597c/kg, up 2 cents; Merino 520c/kg, down 8c; light 541c/kg, down 3c; trade 576c/kg, down 6c, and’ heavy 571c/kg, no change. The national trade lamb indicator closed down 6 cents at 574c/kg and the heavy indice finished on 571c/kg, down 1 cent.

The NLRS said it was a good quality yarding, with good selections of well-finished trade and heavy weight lambs. Most of the regular buyers attended, except for a major southern export processor.

The NLRS said the offering, including about 3300 new season lambs, met reduced competition. Quality was not as good and this was partly reflected in the cheaper prices. New season lambs were best represented by trade weights and a small run of heavy weights. There were more heavy old lambs than trade weights. Supermarkets and exporters were quiet in the cheaper market.

The NLRS said the number of lambs increased with the incorporation of the annual show sale. Overall quality was high and featured a good supply of well-finished young lambs in all weight classes. There were also some very good lambs in the normal sale section. However, reduced competition and increased supply contributed to a much cheaper market trend.

There was a good percentage of well-finished sheep, with most of the offering carrying short skins. The market for plainer condition sheep was cheaper, while the well-finished medium weights were firm to slightly dearer.

The yarding included 14,650 fair quality new season lambs. There was a good offering of well-finished lambs available, along with drier types. Heavy weight lambs were well-supplied. The usual buyers competed in a cheaper market.

The NLRS said the number of new season lambs increased as the annual spring turn-off gathered pace. Most of the usual buyers operated, with bidding dominated by domestic buyers rather than export slaughter competition. The quality and carcase finish of the lead pens of young lambs remained very good, although there were more first cross and lighter weight lambs.

There was no significant restocker interest. The yarding of old season lambs was limited and very mixed for quality as tail-end drafts come through. Heavy lambs sold to $147, with most of the plainer trade weight types making $100-$120, returning varied carcase weight price results depending on finish and breed quality. Light weight slaughter lambs mostly sold from $62-$94 and were dearer in places.

The sheep were mainly shorn Merino ewes, with only odd lots of heavy crossbred ewes which sold to $120. Prices were mostly similar to a fortnight ago, with the good runs of mutton costing processors an estimated 360-380c/kg cwt. There was several drafts of ram hoggets which sold from $66-$96.

The NLRS said lamb quality was good, with most of the usual buyers operating in a generally firm market.

The sheep yarding included all weights and grades, but with more light shorn lines. Some excellent pens of heavy recently-shorn Merino wethers sold from $117.20-$125, with a small pen of extra heavy crossbred wethers making $158.

The NLRS said lamb quality was very mixed. Most of the regular buyers attended, but not all operated fully. More young lambs were yarded this week and they were in average condition with heavier weights scarce. They sold from similar to last week to a few dollars easier on quality.

The NLRS said a vastly improved quality yarding comprised mainly new season crossbred lambs. They sold to easing competition from the usual trade and processor buyers, although one major processor didn’t operate. Feeders and restockers were cautiously active on light weight lambs at rates on a par with last week.

The NLRS said more new season lambs came forward for the usual trade and processor buyers, plus an extra domestic operator seeking new season lambs. However, not all the buyers were fully active. Lamb prices were dearer.

The NLRS said sheep and lamb numbers lifted with warming weather conditions. New season lamb supply increased with nearly 3000, but most were light weight lambs. Old season lambs were of mixed quality and prices were erratic. All buyers operated in a solid market, with most categories selling at very firm prices.