Red meat sector’s carbon plan is a plus with consumers 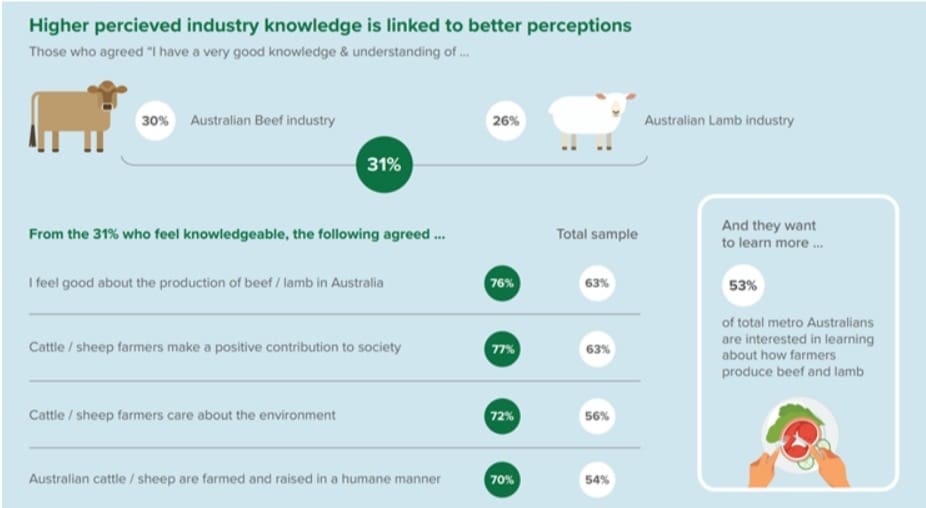 The consumer sentiment research found that with the knowledge that the red meat industry has a goal to be carbon neutral by 2030 (CN30):

– and among those who claim to have a good industry knowledge, 65pc would feel more positive towards the industry if it can achieve this goal.

The independent research by Pollinate has been conducted annually since 2010. It measures and tracks consumer sentiment towards the red meat industry in metropolitan areas.

The Australian red meat and livestock industry’s target to be carbon neutral by 2030 — CN30 — means that by 2030, Australian beef, lamb and goat production — including lot feeding and meat processing — will make no net release of greenhouse gas (GHG) emissions into the atmosphere.

Carbon action on Australian farms is a good news story

Director of the Primary Industries Climate Challenges Centre Professor Richard Eckard believes it is really important for the red meat industry to be marketing its progress towards carbon mitigation, “and making the public aware of these concerted efforts without the need to greenwash it.”

But he recommended that consumer surveys be segmented to get a more accurate picture of what is changing consumer views as a result of any ‘carbon’ marketing and counselled against the industry changing the metrics for methane accounting.

He said the traditional metric used for methane is the 100-year global warming potential (GWP100), but recently a team out of Oxford University published an alternative metric GWP* that showed livestock in Australia had a negative impact on climate change.

“Unfortunately, this led to some marketing that suggested the red meat industry was having a cooling effect on the climate, which is really not correct because all methane warms the atmosphere regardless, but it did mean that declining in animal numbers in Australia is not having the same impact on the climate as it did 20 years ago.”

“Whereas just making the public aware that the industry has set a target for carbon neutrality, which is more ambitious than the power industry or transport industry, plus the industry is investing $XM in research to address these issues (CN30, CSP, EAP, MERIL etc) is not greenwashing and shows greater ambition than the other large emitting sectors.

“I think this is a very good news story and would have a big impact on consumer confidence,” he said.

“Obviously longer term, this is critical for social licence, as these greenhouse gas emissions targets are only going to head towards zero by 2050 and we already see all our competitors around the world setting similar targets, making this inevitable anyway.”

Professor Eckard said some of the work being done with MLA involved workshops with farmers to develop carbon audits on their properties, and devising their own pathway towards lower emissions.

“For some this is becomes a point of marketing advantage, whereas with others it’s just being aware of what the footprint is and what the challenges ahead of them in setting the goal themselves.

“To me there are no downsides here, as in the first instance, a calculation of emissions intensity (GHG/unit product) just helps farmers identify inefficiencies in their current production system and where they can address those,” he said.

“Then the next stage of absolute reductions in emissions (GHG/business) is more a future plan on where they go in adopting legume technologies, supplements, breeding etc to reduce absolute emissions cost-effectively into the future.”

Health and nutrition are reasons for meat demand

The Pollinate consumer sentiment research also found that health and nutrition are the main reasons for people wanting to eat more red meat, with protein and iron being the key factors.

The research also showed Australian’s continue to hold red meat producers in high regard, placing farmers amongst the most trusted members of the community.

MLA managing director, Jason Strong, said the findings reflected a growing acknowledgement of cattle and sheep producers and the work of the industry to share its story.

“Perceptions of the Australian red meat industry are relatively strong, and knowledge of the industry among consumers in metropolitan Australia is growing.

“Our insights also show that positive community sentiment is correlated with the community’s understanding of our industry, and Pollinate Pulse research data highlights that farmers are amongst the most trusted members of the Australian community, alongside doctors and scientists,” Mr Strong said.

“Those who feel they have a stronger understanding also feel more positive towards the production of red meat in Australia, farmer’s care for the environment and raising of cattle and sheep in a humane manner.

“They also believe it is particularly important for school children to learn more about how the industry produces beef and lamb,” Mr Strong said.

“Importantly, consumption and purchasing of red meat has remained relatively stable, and two out of three consumers planning on eating the same amount of red meat or increase their consumption during the next year.”

“MLA’s work around positioning red meat in the marketplace forms a critical part of our strategic plan, and clearly falls under our remit of a provider of marketing services.

“Our paddock to plate concept resonates very well among metropolitan audiences with over half wanting to learn more about how beef and lamb is produced along the supply chain,” he said.

MLA’s consumer sentiment research also showed that the number of consumers who claim to be vegetarian has remained relatively stable over the past few years.

The annual research is used to inform community engagement and marketing activities that MLA undertakes on behalf of the red meat industry, an important component of which is demonstrating how Australian red meat producers are ethical and responsible custodians of livestock, land and natural resources.