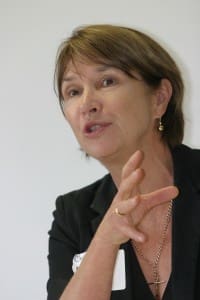 Major Victorian and national meat industry bodies have united to plan the creation and national roll-out of an electronic National Vendor Declaration form for the beef and sheep industries, after an eNVD forum in Melbourne on Wednesday.

Representatives from the meat industry bodies – including Meat and Livestock Australia, Safemeat and LPA committee members, Victoria’s Department of Primary Industries and Environment, the Livestock Saleyards Association of Victoria and the Victorian Farmers Federation – met after the forum at DEPI’s Attwood offices.

Although the meeting participants refused to comment on the result of the discussions until a press release possibly next week, discussions during the forum and at a technical roundtable revolved around how an eNVD could be trialled nationally either within or alongside the current NLIS database system.

LSAV has completed an eNVD trial, a concurrent MLA project is believed to have been “parked”, and MLA’s general manager of value chain innovation, Christine Pitt, with LPA advisory committee chairman Kevin Roberts, attended the forum to work with stakeholders to facilitate creation of an eNVD on behalf of the Safemeat Strategic Initiatives Review Committee.

LSAV president Stuart McLean said there was a need for a proper national approach on an eNVD.

“We know the technology can do it and I can feel a sense of urgency to make this thing happen as quickly as possible.”

The other issue is about getting collaboration from the producer right through to the end of the chain, he said

“This project when it started off, part of the brief was that it had to be producer-friendly.

“We are well aware of the fact that if you don’t get the platform right, the rest of it will fail.”

“Notwithstanding that this project was state-based; the electronic national vendor declaration process must be truly national in concept and acceptance.”

“I see this project as being right up my alley, if you like – so the notion of electronic transfer of information across well-functioning value chains is very dear to my heart.

“And whilst NVDs are a fairly basic information exchange — it is really just a declaration between a seller and a buyer – in terms of some of the basic things that need to be exchanged between them — I think it is also part of the bigger picture of information.

NVDs represent co-operation along the value chain and it would take the industry forward in terms of market access, higher value positioning of Australian produce in overseas markets and basic integrity, she said.

“So we definitely see a vision of a national electronic NVD system,” but she said there would need to find the right balance between commercial innovation and basic system integrity.

“So I’m committed to working with LSAV – I hope we can and I’m sure we can – to come up with something that achieves that sort of outcome.”

Mr Roberts said he saw an electronic NVD system as able to pull down barriers to a national approach to livestock product assurance.

“The system needs to join the 21st century.”