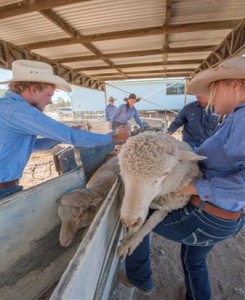 DESPITE the importance of the production sector of the red meat supply chain and the unique employment opportunities it offers, many sheep and lamb producer employers face major challenges in attracting and retaining workers, an industry survey has found.

MLA last year repeated a survey first conducted back in 2007 on attraction and retention of staff in the red meat industry.

It again found that the low and declining availability of labour is a major constraint to operations. Low job application rates, high staff turnover and shortages of experienced labour increase labour costs and reduce enterprise efficiency.

While there are predictions for modest growth for jobs in the industry in the next four years, partly due to the downturn in mining activity (a competitor for labour in regional areas), unpredictable conditions (climate variability and market volatility) make it difficult to project exactly what will happen to employment levels, the report said.

It found that the average number of full-time vacancies per farm/property has significantly decreased since 2007.

Many individual farms reported labour shortages, particularly during peak periods. However, the data suggest that there is usually a match between demand and supply for most employers, except for larger northern properties during the dry season peak period. The latter required significantly more staff in peak time and experienced larger labour shortfalls than other sectors.

The number of employers citing drought as a key factor influencing demand for labour has decreased since 2007, suggesting that although drought remains an issue, it may not currently be a key driver of labour demand.

The problem of recruiting staff to the industry is widespread across Australia, however the problem was found to be significantly exacerbated for the northern beef sector in both peak and non-peak times.

The common perceived reasons for difficulty with recruitment reported by employers have not changed significantly since 2007 and include shortage of skilled people, low wages, losing workers to mining and lack of existing people being skilled up to work in the industry.

The most common and effective recruitment method used was asking local people directly. Employers who advertised in a non-local newspaper or who recruited through a recruitment agency had significantly more difficulty with recruitment.

Factors influencing attraction of workers to the industry include having a family background of working on the land, the lifestyle, working with animals, and working outdoors. The farm or company’s reputation also influenced employees’ choice of specific employer in the industry.

The extent of problems with turnover has remained relatively stable over time, but appear to have increased for part-time workers.

Some 61pc of respondents indicated that they did see a long-term future at their current place of employment – slightly higher than in 2007. However employees on smaller farms had significantly lower levels of certainty about their future with the business than those employed by large and medium-sized livestock operations.

Most employees who had moved from a previous employer did so because they found better career opportunities elsewhere.

Many employers reported that allowing flexible working hours was the most effective retention strategy. Increasing salary was also perceived to be a useful strategy by employers, but data from employees showed that level of pay and benefits had little or no impact on their intention to stay with their employer, nor did it affect job satisfaction, morale or engagement.

This indicates that, in contrast to employer perceptions, amount of pay is not as important as first thought.

Despite many employers’ belief that losing skilled workers to mining was a major reason for recruitment difficulties, the proportion of people in the industry who wanted to go into mining was very small, and has in fact decreased over time (from 3.3pc in 2007 to 1.5pc).

Standards set by the European Union suggest that working more than 48 hours per week poses a risk to individual health and well-being. The study found that 64pc of the workforce is at risk and only 13pc work ‘sustainable’ hours.

This suggests possible problems relating to burnout and fatigue, the report said. The proportion of people working unsustainable hours has not changed significantly since 2007.