MULTIPLE records tumbled at this year’s re-jigged Bendigo annual first cross ewe sale where prices were described as being “fair” for buyers and sellers.

The first of the records to tumble was the size of the 2021 offering which tallied 33,228, following a decision by Bendigo agents to combine their two previously-held annual markets into one feature event.

The decision filled the Bendigo saleyards to capacity and the monster yarding generated $11 million in earnings for northern Victorian first cross ewe breeders.

It has showcased the first-cross breeding in this northern part of Victoria, Mr Leech said.

“The penning of one-and-a-half-year-olds, in particular, batted very deep; it was an outstanding display.

“It didn’t matter if you bought in the first pen, pen 20 or pen 30, you were able to purchase a style and type of sheep that suited everyone’s budget,” Mr Leech said.

The second record to tumble was the market’s top price for young unjoined ewes that rose sharply to $516/head, eclipsing last year’s best of $446.

Mr Leech said that with this result it was a good reward for the breeders to continue their craft, and a fair price paid by those wanting replacement on the strength of prime lamb and ewe mutton markets.

Topping the young ewe market at $516 – the highest price so far this season – was a line of 98 May-June drop ewes sold by the breeders, Allan and Janine Wiltshire of Prairie.

The mulesed and Gudair-vaccinated ewes were bred out of Panorama blood Merino ewes by Black Gate Border Leicester rams and weighed 87.3 kgs. 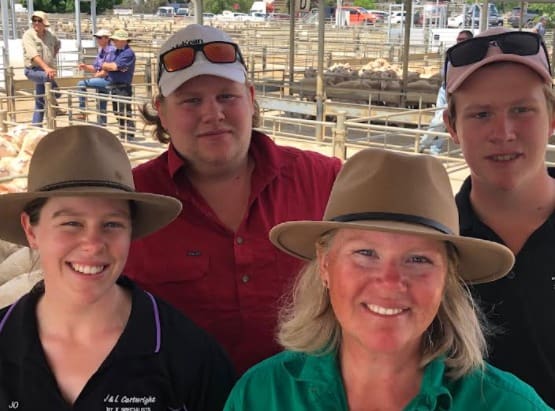 The Cartwright family’s draft was sired their own Bungaree Border Leicester rams and bred out of South Australian and Western Australian bred Merino ewes. The 78kg ewes were judged the market’s best presented. The Hay family ewes weighed 79kgs and were bred from Bundyalumbah Merino ewes by Towarri BL rams.

The Cartwright family sold a total of 937 ewe hoggets in five lots that overall averaged $483 and the Hay family’s consignment of 336 averaged $481. Julian Laffan and son Oliver from Moama, had a great day out selling their ‘Everdry’ young ewes at $480 and ewe lambs for $385.

Bridgewater vendor D.R. Collins and Partners sold a 100 young ewes bred from Alma and Mulloorie blood Merino ewes by Black Gate BL rams for $492. The next best price was $480 for 247 ewes offered by Julian Laffan, Everdry, Moama, and for 155 ewes from J.H. Wall and Sons, Caniambo.

Watch the live vision of the opening sales:

The third record to tumble was the market best price for ewe lambs that firmed slightly to $456 after a top of $444 a head 12 months ago.

While sales of ewe hoggets exceeded all expectations the demand and overall enquiry for the ewe lambs was more subdued than normal in spite of a one-off higher price.

The cause of this apprehension according to Richard Leech was multi-focused, with the growth and development of the penning trailing that of previous years.

The wet and cooler winter has had its effects on stock this season, Mr Leech said.

“Our lambs are 6-8 weeks behind in their development; however, in our southern buying areas many of those producers are yet to sell lambs and at current change-over values is possibly causing some financial distress,” he said. Penned at the head of ewe lamb yarding, and judged as the best-presented ewe lamb exhibit, was a lot of 251 drawn from an 800 head consignment offered by D.R. Collins and Partners, Bridgewater.

Similarly bred to their year-older sisters sold in the hogget sale ie. from Alma and Muloorie Merino ewes by Black Gate BL rams, the April-May drop ewes weighed 66kgs and made $428. A second line of 200 (59kgs) made $398. The McKean McGregor team is action during this year’s monster 33,480-head $11 million sale.

As the sale progressed and the weights declined demand became was inconsistent and less intense. This is best explained by a close analysis of the sale results that revealed that lines above 50kgs liveweight sold for an average of 655 cents per kilogram, while those weighting 40-50kgs averaged 612 cents/kg lwt.