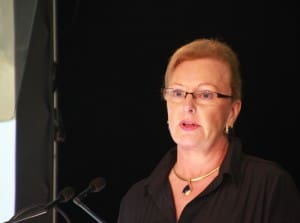 The red meat industry service organisation is funded by grower levies and matching Government contributions for research and development.

It receives $4.58 from every $5/head transaction levy paid on cattle sales to conduct marketing activities ($3.66) and research and development ($0.92) for industry.

A record slaughter of 9.3 million cattle and the live export of 1.4 million cattle in 2014-15 pushed MLA’s total revenue from grassfed cattle transaction levies to $66.9 million, 9.3pc above the previous year.

MLA also receives funds from the 2pc levy on the sale price of sheep to fund marketing and research and development for the sheepmeat industry.

The revenue windfall brought by the record 2014-15 cattle turnoff doesn’t mean MLA has mountains of spare cash to instantly spend.

The funding goes into reserves held as deposits with the big four banks.

Revenue from each levy is put aside for the income stream for which it is generated. So funds accumulated under the $3.66 marketing component of each $5/hd grassfed cattle transaction levy paid can only be used for that specific purpose.

“Even though it is record income, we don’t use it,” MLA managing director Richard Norton explained.

“The money sits there on reserve and then it is drawn upon to fund R&D and marketing.

“We only use it for what has been approved by Peak industry Councils for that financial year.

“We have a lot of forecasting which will demonstrate the level of programs coming out of MISP 20, where we will be in terms of income and how much of that levy reserve we will draw down upon.”

The boost to levy reserves is timely given that MLA faces uncertain funding flows next year.

The huge number of transactions in 2014-15 are unlikely to be repeated in 2015-16, particularly if rain falls across the north and triggers widespread female retention for herd rebuilding.

“Next year all depends on when it rains, and on which day of this year it rains,” Mr Norton said.

The revenue boost comes after a year of transformational change at MLA in the wake of a long-running Senate Inquiry into grassfed cattle production.

A restructure led by chair Dr Michelle Allan and MD Richard Norton has cut employee numbers by 11.9pc to 237, and more than $6.5 million in fixed costs stripped from the business and redirected into R&D and marketing funds.

A record breaking year of high production, cattle prices, export numbers and retail prices had seen the total value of Australia’s beef and lamb industries climb to $23.2 billion in2014-15, 18pc above the previous year.

Dr Allan noted that the positive trend was tempered by drought across large areas and historical high cattle turnoff in 2014-15 will mean a much smaller herd over coming years, a continuation of strong cattle prices and reduced availability of beef in the domestic market.

Like beef, the lamb market has featured record production and historically high prices, while the goat market had also performed very strongly in 2014-15, with unprecedented prices.

A year of tremendous change

Richard Norton told yesterday’s MLA AGM in Brisbane that 2014-15 had been a year of tremendous change for MLA.

“I want you to know that we have listened and we have responded,” he said.

“We needed to become more transparent, more efficient, and engage and consult with you more, and to have more two way conversations

“We have listened, we have responded and we have changed”

“We have listened, we have responded and we have changed. We are more transparent.”

He said producers can now find out how their levies are being spent at any time on the new-look MLA website, and can now join one of 19 regional consultation panels around the country to provide direct input into areas of research that they see as most important for MLA to undertake.

“Please get engaged, and join our regional consultation through the northern and new southern and western research councils.

“It is now up to producers to make these panels work.”

Mr Norton said outcomes delivered by levy funding in the past year included: