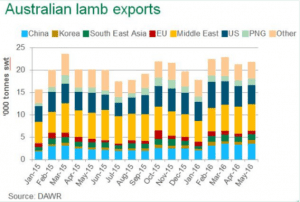 RECORD lamb shipments in May have pushed exports this year to 104,859 tonnes – 7 percent higher than was achieved in the same period in 2015.

Meat & Livestock Australia said Department of Agriculture and Water Resources data showed May lamb shipments of 21,562 tonnes were the highest for that month since MLA records began in 1995, up 9pc year-on-year and 17pc on the five-year (2011-2015) average.

Shipments to Australia’s two largest volume lamb export destinations — the Middle East and US – and to Japan and the EU, were relatively steady in May, compared to last year. But shipments increased to China, Papua New Guinea, South East Asia and Korea.

MLA said lamb shipments to China in May were the highest since October 2014 and exports to Korea doubled.

Higher lamb production had also contributed to the higher export volumes so far in 2016, with volumes produced during the January to April period (latest available data) 2pc above the same time last year.

MLA said increased lamb turnoff was driven mostly by prolonged warm and dry conditions across the key eastern lamb producing regions during summer and autumn, MLA said. In contrast, WA had a particularly wet finish to summer and start to autumn, encouraging producers to retain lambs and graze a little longer. On the back of a late autumn break at the end of May, and in line with a normal season, lamb supplies are anticipated to tighten over the winter months, MLA said.

Volumes to the Middle East in May were very similar to the same time last year, at 5953 tonnes – although 23pc higher than the five-year average. A 5pc decline in leg shipments to 701 tonnes was offset by a 2pc increase in lamb carcases to 3982 tonnes during the month. This was quite a large monthly volume in historic terms, with long-term growth in the market accentuated by the need for stocks to be built up ahead of Ramadan through June, MLA said.

US shipments eased slightly (3pc) year-on-year, to 4297 tonnes in May. Despite the slight downturn, volumes to the US have been particularly high over the past eight months, influenced by a number of factors. Reports from in-market suggest lamb consumption in the US has increased over the last 12 months, supported by a rise in imports, while domestic lamb production remains static, MLA said. Lamb has become more popular in US foodservice and retail sectors, with retail sales volume up 5.6pc and value 6.1pc higher year-on-year for the 12 months to April 17 this year.

While leg, rack and shoulder shipments to the US declined year-on-year in May, volumes of assorted cuts (three or more primals packed together) increased 49pc, to 1040 tonnes, MLA said. Despite the average lamb export unit value (per kg) to the US remaining below year-ago levels during the January to April period of 2016, reports suggest the US is still a favourable market at the moment for Australian exporters for cuts such as legs, racks, loins and shoulders.

MLA said May’s lamb exports to China were the highest since October 2014, at 3813 tonnes – up 52pc year-on-year and 30pc higher than the five-year average for the month. Volumes of shoulder jumped from 24 tonnes last May to 446 tonnes this year, while breast & flap exports increased 30pc year-on-year to 2353 tonnes. Domestic sheep meat inventories in China are being worked through and buyers there have been keen to source supplies ahead of the anticipated production slowdown over the winter months in Australia and New Zealand., MLA said.

Lamb export volumes to Papua New Guinea, one of Australia’s lower value lamb markets, in May were up 23pc on the same time last year, at 1453 tonnes – primarily due to a 34pc increase in breast and flap shipments for the month to 1237 tonnes.

MLA said lamb exports to South East Asia were 9pc higher year-on-year in May, at 1269 tonnes, with the largest volume of 853 tonnes going to Malaysia.

Shipments to Korea more than doubled in May to 815 tonnes, due to breast and flap exports (236 tonnes) more than tripling and shoulder (333 tonnes) increasing 66pc year-on-year.