Meat and Livestock Australia has hinted at the possibility of record lamb and mutton prices this year, in a new report released yesterday.

In the report ‘Australian sheep and lamb prices – where do we really stand?’ MLA said all the factors that created the 2010-11 lamb and mutton price records – averages of 585c/kg for trade lambs and 437c/kg for mutton — are present again this year.

These include a low flock and strong export demand from the Middle East, US and Asia. The report said three further positive factors are also present, that should provide greater stability in the market than in 2011. These are the lower $A-US exchange rate, liberalisation of the Australian sheepmeat trade to China through the free trade agreement and an expected reduction in NZ’s flock and sheepmeat exports.

“The main drag or risk to prices, as always, lies in the possibility of drought and unexpected trade disruptions,” MLA said in the report. 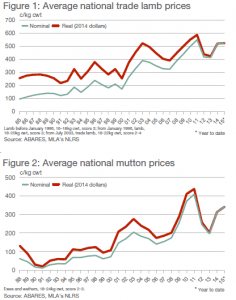 The report said Australian lamb prices have doubled in real terms in the past 30 years and mutton values have almost trebled.

“For the first quarter of 2015, real trade lamb saleyard prices are double where they were three decades ago, averaging 524c/kg cwt, while real mutton prices have improved close to three-fold.”

Since 1985 Australia’s sheepmeat industry productivity has not outstripped demand, and despite significant production growth in the last decade, significant real price rises have been recorded, indicating the underlying strength in demand, MLA said.

Lamb is the only major agricultural commodity to register a positive long term growth in real prices since 1985. 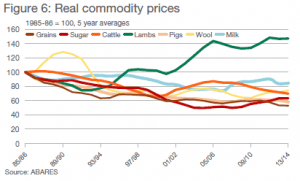 Global exports have not kept pace with demand

The report said that although sheepmeat makes up only a small and declining share of global meat consumption, world consumption has more than doubled since 1962, due largely to a rapid increase in demand from China. MLA said despite Australian sheepmeat production rising to a record 486,565 tonnes in 2014, the global exportable sheepmeat surplus has reduced due to declining NZ production, meaning supply has failed to keep pace with demand.

Crop increase cuts the flock, but sheepmeat profits trend up

The MLA report said the cost of sheepmeat inputs has increased since 1985 and increasing competition for land, and the cyclical nature of productivity, remain significant industry constraints.

“Beyond the influence of rainfall, (Australian sheepmeat) supply going forward also depends on returns relative to other commodities, such as wheat and wool.”

ABARES surveys show that in 19 of the past 20 years, cropping enterprises have recorded the highest average rate of return among broadacre industries, with the result that crop area has almost doubled since the early 1970s and the national sheep flock has halved. 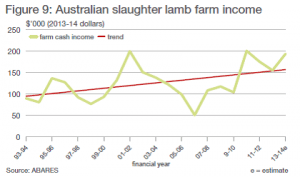 But the report said the sheepmeat profitability outlook was bright, with slaughter lamb farm cash incomes and profits showing a steady long term upward trend despite fluctuations in prices, input costs and productivity. Although ABARES estimates sheep industry productivity grew an average of just 0.2 percent from 1977-78 to 2012-13, compared to 1.3pc for beef and 1.5pc for cropping, between 2000-01 and 2012-13 flock production outpaced all other broadacre industries, growing 2.3pc a year. 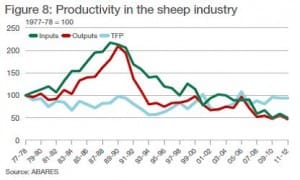 To view the full report, which gives a brief history of lamb and mutton prices since 1985 and examines the key factors influencing the industry up to 2015, click here.