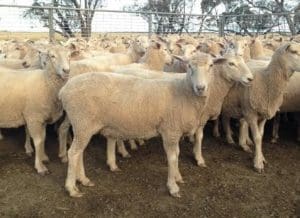 The first cross ewes sold for $456 with their lambs at Wycheproof last week.

BRIM farmer Bernie Lindsay knows there is money in good sheep management after his two-year-old first cross ewes and lambs were sold for a record $456 at the Elders Wycheproof sheep sale last week.

The LTEM program run through RIST and funded by Australian Wool Innovation has helped more than 2400 sheep producers across Australia improve ewe nutrition and management. Strong competition of buyers in the grip of ‘grass fever’ didn’t go astray at the Wycheproof sale, but Mr Lindsay said the “unbelievable” price paid by Euroa district lamb producer Bill Rennie for his Prospect Rural ewes was underpinned by the preparation and condition of the ewe-lamb units.

“The price is (unbelievable), but it isn’t.

These calculations would put the first cross ewes’ cost at less than $250 for a ewe able to produce 150pc+ of lambs, he said.

LTEM principles ‘sharpened us up’ 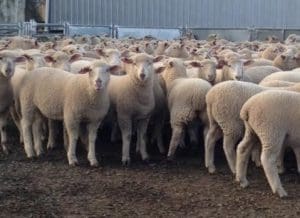 The Detpa Grove White Suffolk cross lambs that sold with their mothers for $456.

Mr Lindsay said the ewes – bred by Alderside Park-blood Border Leicester rams out of Collinsville blood Merino ewes — cost him about $153 landed as one-year-olds from Alan Hewitt at Warracknabeal through Elders agent Aaron Zwar in early 2015. They had 100pc lambs in their first year, before he implemented LTEM with the help of Dynamic Ag consultant Steve Cotton on his mainly cropping property in Victoria’s Wimmera. Mr Lindsay is also a member of the district BestWool BestLamb group.

“Our management was damn good basically – we fed up the twins and everything went our way.”

He said having the sheep at the right condition score, scanning and separating the twinners has helped, although it has been difficult to find paddocks within the cropping operation. He believed LTEM helped add about 20pc to his lamb marking percentage.

“We got better at feeding and containing sheep.

“By implementing what we’ve learned and working with Steve we’ve done well – it (LTEM) really sharpened us up.”

Mr Lindsay said there was money in good sheep management, although his operation revolves around grain cropping. His crossbred flock of usually around 700-900 ewes is managed on about 500-600 hectares, with about 2500-2600 hectares under crop. He sows barley and vetch for the sheep, but was running out of feed after spraying out too much country too early.

“But cropping is my game.”

In transition to Merinos with cropping

With his LTEM in place, wool prices at “okay” levels and crossbred ewes prone to high liveweights, Mr Lindsay is now “in transition back to Merinos” and looking for plain-bodied ewes. He initially bought the Hewitt first cross ewe lambs as a “stop gap” to be sold as joined ewes.

“I used to lamb in April and aim to get rid of my lambs before harvest when we run out of feed, now I’m planning on lambing in July and hanging onto my lambs and running them over my stubbles myself (for February-March sale).

“With a Merino I reckon I can keep them to the ideal condition score without putting on too much weight.”

Mr Cotton said it was important sheep producers considered kilogram of carcase weight per hectare as a profit driver.

“While the $456 price was a great result and showed how important sheep were in cropping systems, we’ve still got to look at the profit drivers, which include kilograms of carcase weight per hectare, not dollars per head.

“We’re continuing to works towards bringing more sheep into the Wimmera and managing them better.”

Mr Lindsay said perhaps sheep producers tend to underestimate the value of sound ewes with a good percentage of lambs. He remembers buying older ewes and lambs with his father at Wycheproof as a young farmer after passing up the top pen for about $370.

Wimmera farmers with sheep were hanging onto them, he said, although the labour involved in sheep was still an issue for croppers with large acreages sown.

“I’ve got to give credit to my part-timers – Max Golda did all the sheep work during cropping and Brad Jenkinson – they’ve got on board with it all.”

$456 was a record for the Wycheproof sale

Elders Wycheproof agent Jim Coffey said the sale of the $456 ewes was a record for the saleyards with strong interest in the yarding and a huge crowd of buyers at the sale.

“It was one of the biggest crowds we’ve seen for years and a lot of them went home empty-handed and a lot of them might go home shaking their heads, but even the better end of our Merinos ewes we were selling for $200-$230, I reckon they are not bad buying.

He said the usually drought-ridden Mallee was in “new territory” with farmers unlikely to have enough stock to eat the pasture that will be available after recent rain.

“Wycheproof with a 14 inch average rainfall and we’ve been getting 6-8 inches for 15 years, all of a sudden we’ve now had  17 inches – we don’t know what we are going to do with the grass.

He said Mr Lindsay’s Prospect Rural ewes were in top condition and the lambs were very even, well-muscled and well-grown. The ewes were bought over the phone for Mr Rennie by Landmark Harcourts Euroa agent Russell Mawson. The losing bidder was Elders Warracknabeal agent Bob Peters acting for Mark McPherson from Brim.

Mr Rennie said he has been buying ewes out of the Wycheproof yards for several years, mainly 1.5 year-olds. The Rennie family operation runs about 1800 crossbred ewes at Longwood. They join most of their ewes to Texel rams, expecting lamb marking percentages of 150pc-plus and sell the lambs over-the-hook. He said the ultimate cost of the Lindsay first cross ewes would depend on the sale price of their lambs.

“We never saw them, but they are good sheep and we’ve got heaps of grass.

“But there is no guarantee the lamb price is going to stay good.”

Mr Rennie’s son Bruce had expected the Lindsay ewes to make at least $400 based on the season, and lamb and young ewe prices this season.

“We’ll probably keep them until they are 8 year-old – we should get out of them alright.”

Mr Zwar said he advised Mr Lindsay to sell his ewes and lambs together at Wycheproof because they were “an outfit that everyone wants and no-one can find.”

“I said you will be first cab off the rank and I said I’m still not sure what the final result will be, but you better bring your tuxedo because you will top the job.”

Mr Zwar said everyone was surprised at the ewe-lamb price, but there was strong general enquiry from agents in the network before the sale.

Mr Coffey said there would be still plenty of opportunities for established sheep producers to restock.

“If you are a cropping man that wants to come back into the caper, it is if going to be hard to find the money to get in.”

Mr Coffey said the region’s sheep producers who have just come through two years of drought were now being paid for their efforts “and so they should be, it’s time it happened.”