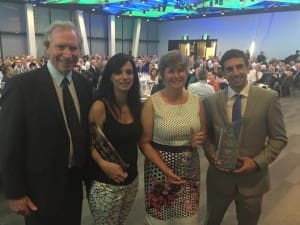 Within four months of its launch last July, the popularity of RamSelect.com.au quickly grew to include details on more than 10,000 rams from 120 studs – equivalent to 5 percent of the national ram market.

It was developed by the Cooperative Research Centre for Sheep Industry Innovation (Sheep CRC), in conjunction with Telstra, Pivotal Labs in San Francisco, and the NSW Department of Primary Industries.

Sheep CRC chief executive officer James Rowe said it is incredibly satisfying to receive an award which recognised the quality of the science and technological innovation that has gone into making RamSelect.com.au such a popular and useful app.

“The only thing more satisfying is the knowledge that the app itself is improving the genetic make-up of flocks around Australia and the bottom line for the producers who use it.”

Prof. Rowe said the level of collaboration between the organisations involved was a crucial ingredient in the development of RamSelect, with team members travelling to the Pivotal Labs headquarters in San Francisco to work closely with developers to ensure the app presented scientifically accurate information in a way that met producers’ needs.

Professor Rowe said the partners’ contributions to market research and end-user testing ensured that the product design truly met the needs of sheep producers when purchasing rams for their businesses.

“For the ram market to work efficiently it is essential that Australian Sheep Breeding Values (ASBVs) can be used easily and effectively by both seller and buyer.

“The beauty of RamSelect.com.au is that it uses plain English and intuitive design to enable sheep breeders to quickly rank rams available for sale that meet their individual business objectives – all of which is underpinned by the individual animal data held on the LAMBPLAN, MERINOSELECT and DOHNE databases.”

During the 2015 ram-selling season usage of the site peaked at 800 producers per week, while on average more than 200 sheep breeders have been using the site each week to review rams listed at upcoming sales.

The Sheep CRC is currently planning updates to the app to add new functionality and further enhance its value to sheep breeders.