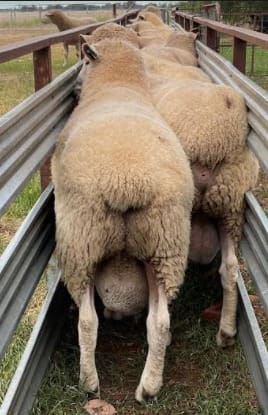 A BACTERIAL infection in rams has cut ewe scanning results in some sheep flocks by up to 20 percent this year, according to Bendigo-based veterinarian Tristan Jubb.

Dr Jubb said this year he has encountered a higher than normal number of flocks with poor scanning results caused by epididymitis in ram teams.

“Epididymitis is an inflammation of the tubes connecting the testicle to the vas deferens where it causes a blockage.

“It’s usually due to a bacterial infection with the sexually transmitted Brucella ovis, or Actinobacillus seminus which establishes in young rams’ genital organs at puberty,” he said.

“Even with aggressive antibiotic treatment the blockages are irreversible, the rams needing to be culled without delay,” Dr Jubb said.

He said the infection rate in a ram team can increase with time until it reaches a “tipping point” at which the conception rate in the flock drops quickly.

“People don’t notice it for a few years because there will be a few rams that will rise to the challenge.”

Border Leicester, White Suffolk and Poll Dorset breed rams with the infection appear to be overrepresented this year, with relatively fewer problems in Merinos and the shedding breeds, he said.

Dr Jubb said he can usually pick a ram problem when scanning if there is a high empty rate combined with good twin to single ratios and lack of conceptions in the second joining cycle.

“Some producers are getting a 20pc empty rate when there is normally 5pc.

“The high ratio of twins to singles means the ewes have cycled well, but the high empty rate and lack of second cycle conceptions means the ram team has quickly run out of semen early in the joining period,” he said.

Dr Jubb said it is always a good idea to get a veterinarian to check the ram team 8-10 weeks pre-joining and again soon after joining.

“There’s a lot to lose if these infections aren’t picked up early in a ram team,” he said.

Detection of the infection requires palpation of rams and a blood test for confirmation.