YOUNG Merino ewes peaked at $345 a head at the Deniliquin spring store sheep sale on Friday in a subdued market where limited lots made more than $300 a head.

The yarding of 17,000 sheep was visibly not at its best after being soaked by 20 millimetres of heavy overnight rain and buyer attendance was less than expected, especially from regions south of the Victoria-New South Wales border.

However, for those that made the journey their efforts were rewarded by claiming the majority of the better-end drafts, while online support was more prevalent for the improver lines and in particular, a substantial selection of locally-bred wether lambs.

Commenting on the subdued attendance, Nutrien auctioneer Marc Braybon said the recent addition of online bidding into the physical marketplace had become a two-edged sword.

“On one hand, the extra competition the internet brings has its benefits from an auctioneering perspective, but it tends to rob the physical auction of its intensity, and the intent of those who would normally need to travel to buy.

“It (the dual bidding system) is a necessary requirement at the moment; however, it will be interesting to see if it continues into the future,” Mr Braybon said. Topping the sale was a pen of 150 drawn from a consignment of 700 Old Ashrose-blood young ewes bred north of Broken Hill on Avenel Station and grown out at Bunnaloo by the breeder, Avenel Partnership. The June/July 2020 drop and April-shorn lot weighed 61.4kgs and was eagerly snapped up by Rodwells Euroa, which then topped a truck with a further 220 head from Avenel’s second run of 547 (51.8Kg), priced at $330.

Other lines of young ewes to sell beyond $300/head included a pen of 230 (54.5kgs) purchased as lambs from Western Australia and grown out by A&K Crossley, Deniliquin. And, the highly regarded “Mooloomoon” ewes (53.2kgs) bred at Moulamein by Berambong Pty Ltd.

A feature of the sale was the dispersal of the 120 year-long Toms Lake Merino breeding operation by Robert and Michelle Crossley, Toms Lake, Booligal.

The dispersal included stud and commercial lots and followed their decision to move into a non-wool shedding sheep Dorper-based operation motivated by future long-term management issues.

The dispersal commenced with a pen of 2021-drop stud Merino ewe lambs that sold exceptionally well at $285, while drafted commercial pens made $270 and $235. 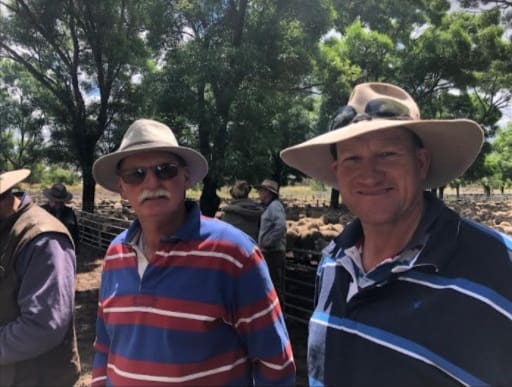 Elders auctioneer Jason Andrews said the interest expressed in middle age and older ewes was high and exceeded expectations of most on the day.

“I believe these were better priced than previous Riverina sales; however, along with the improver lines of young ewes these would provide an access to sheep with reasonable outlay comparative to returns from wool and lamb,” he said.

While “on-the-ground” competition prevailed for ewes, online bidding via the AuctionsPlus interface dominated the wether market.

In the opening pen of the sale, a lone yard of crossbred ewe lambs made $380 for K. Crossley, ‘Kapunda’, Deniliquin. The line 143 September-shorn lambs was sired by Cadell Border Leicester rams on account the breeder.

The sale was conducted by Deniliquin Associated Agents; however, unlike previous Deniliquin special September sales there were no fattening type crossbred lambs offered.