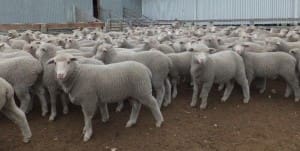 RECENT rain has boosted prospects for South Australia’s Murray Bridge lamb sales in August and September and for restocking demand for off-shears ewes.

The forced turn-off of some early new season lambs out of the Murray Bridge and Mallee areas is continuing, though slowing down.

And Elders and Landmark agents at Murray Bridge south of Adelaide still expect to offer about 25,000 lambs in their annual fortnightly sales through August and September.

The Murray Bridge agents are expecting to offer 6000-10,000 new season and wether lambs per sale in August-September, despite the early forced turn-off of thousands of lambs due to the difficult season.

Elders Murray Bridge agent Phil Nagel said the eastern part of the area had been very dry – from Murray Bridge to the SA border – and producers had sold significant numbers of store lambs on AuctionsPlus already.

“But we’ve had rain over the last three to four days and things are shaping up, so we will have some good lambs coming on and enquiry has been really good of course.”

The first lamb sale will be on August 10 this year and Mr Nagel was expecting similar numbers to last year’s sale when about 5500 lambs were sold. He expected lamb numbers to peak at about 10,000 per sale in September.

“In four sales we would like to think we would put through about 25,000 lambs, principally all out of the Mallee.”

“We’ve probably sold 3000-4000 lambs already because blokes have worked out they wouldn’t be able to finish them,” he said.

“And a lot of our ewes that would have been held for spring sales have gone to slaughter already.”

Mr Nagel said the sale of early suckers had slowed in recent weeks, but was still continuing online as producers look to save feed for later lambs or first cross lambs at the annual Naracoorte sales in November.

“If we hadn’t had 120 points (20-30mm) of rain in the last three to four days, we would have been in diabolical strife, but in this country an inch of rain goes a bloody long way.

“From being doom and gloom a week ago and people pulling their hair out, they’ve now got a smile on their face again.”

“We’ll be out of our lambs by the end of September.”

He said some lambs west of the Murray River were at above average weights.

“Our yarding will consist of fresh stores 30-35kg liveweight right through to top of the range 22-24 kg carcase weight suckers.”

Early lamb sales would only have a small effect

Landmark Murray Bridge agent Kev Keller said if the area had not had the recent rain the expectations for the coming lamb sales would have been different.

“With the rain we’ve just had the prospects at this stage look fairly promising.”

After the four sucker lamb sales in August-September, the agents are still planning a wether lamb sale in September, an off-shears ewe sale and another ewe sale in October.

Mr Keller said the early turn-off of some lambs online would have a small effect on the August-September yardings of lambs and ewes.

“But they will still be pretty promising sales, especially with the money that appears to be around at present.

“You always get a few lambs that are forward contracted, but we usually have some of the better lambs around early in the season through that area.”

Mr Keller said the Murray Bridge area has had a pretty good season and good lambs with weight were coming in early, though Mallee producers have struggled more.

“Every time it rains this time of the year they talk about a rain worth millions of dollars and this rain that we’ve just had it is probably the most valuable rain I’ve seen in a long time.

“There were areas where it was going to be a disaster, but it has turned around now.”

Mr Keller suggested more 5.5-year-old Merino ewes had been sent to slaughter from SA’s Mallee area this year after lambs were weaned, cutting numbers available for the coming off-shears sales.

“The 5.5-year-olds will probably be less plentiful this year than they normally are.”

Pasture growth generated by the recent rain across SA could make a difference to ewe prices, he said.

“I think there will be a few people trading on a few ewes and lambs providing the feed is around – and I can can’t see any reason it won’t be a winner.”