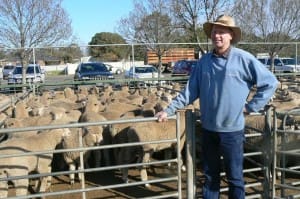 Trade lamb prices lifted $7-$12 in weekly sales and were up to $20 dearer than two weeks ago at Cootamundra.

Across NSW and Victoria, any quality news season trade and heavy lambs were snapped up for 540-691c/kg, with all lines in these weight ranges at Cootamundra making better than 619c/kg, and all Wagga’s heavy young lambs exceeded 600c/kg.

The break in supplies pushed all National Livestock Reporting Services national and Eastern States Daily Indicators for lamb and mutton up, with the slaughter lamb indices moving 9-16 cents.

In New South Wales at the Cootamundra saleyards on Wednesday, the agents yarded 3347 lambs, 2953 fewer than the last sale two weeks ago, and 1400 sheep, 900 less.

The NLRS said 40-50mm falls of rain in the supply area halved numbers and affected the quality. Nearly 500 new season lambs were offered, along with a small run of old trade weights and good numbers of plainer light Merinos. Most of the usual buyers operated in a dearer market.

Sheep quality was mixed. Prices were firm to slightly dearer. Medium weights sold from $80-$124 and heavy weights reached $130. Most ranged from 380-430c/kg cwt.

At the Central Tablelands Livestock Exchange, Carcoar, on Wednesday, the agents yarded 3550 lambs, 2140 fewer than last week, and 1575 sheep, 625 less.

The NLRS said numbers were back considerably after excellent falls of rain over the past few days. There were a few pens of trade weight new season lambs yarded along with odd pens of well-finished old lambs. No extra heavy weights were penned.

It was a plain quality yarding of mutton, of mainly store conditioned ewes and wethers. All grades were dearer, with 2 score ewes selling to restockers at $34-$56. The 3 and 4 score Merino ewes sold to processors for $72-$100 and crossbreds made to $125. The 2 score longer wool wethers sold to restockers for $60-$108.

The NLRS said the extremely wet conditions resulted in a significant drop in numbers, with producers unable to load trucks. The quality of the offering was very good with just over 10,000 new season lambs penned. Old lamb numbers declined and quality was quite mixed, with a limited portion well finished. A full turn-out of domestic and export buyers operated.

New season lambs ignited the bidding, with prices lifting $7-$10. Major domestic processors were the market drivers, competing for the bulk of young lambs weighing above 21kg cwt. The best of the 20-22kg lambs made from $138-$164 to average 649c/kg cwt. Buyers this week operated on skin values of $10-$12.

Restocking buyers entered the market for well-bred new season lambs and the lighter portion sold from $81-$88.

Merino lambs were well-supplied and quality varied greatly through each category. The better finished trade Merino lambs sold $7-$10 higher at $117-$145.60.

The much plainer quality sheep yarding included all weights and grades. A fair percentage of ewes and wethers were lighter weights, with little skin value. Light sheep sold $8 dearer at $54-$78. Merino trade sheep made from $89-$114. Heavy ewes were keenly contested and prices jumped $8-$10 to 377-395c/kg cwt.

The NLRS said agents offered 3000 new season young lambs. Most of the regular buyers operated keenly. The young lambs presented in average to good condition, but are lacking a little finish.

The NLRS said the quality of the lambs was plain for the lambs. All the regular winter buyers attended, but not all operated 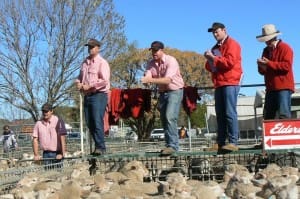 The Elders Ouyen team in action this week.

At the Ouyen Livestock Exchange on Thursday, the agents yarded 5417 sucker lambs, 3507 old lambs and 3194 sheep. All of the usual buyers attended.

The BR&C team sold a pen of donated cross bred suckers for $310 a head to support Matt and Amy Tomlins and family.

The NLRS said it was a mixed quality yarding at Katanning. Prices were firm on last week, with prime new season lambs selling to $127. All the usual buyers attended.

In Queensland at the Warwick saleyards on Wednesday, the Warwick Selling Agents yarded 1529 lambs and hoggets, and 710 sheep.

The top-priced lambs were estimated at 57.5kg lwt and made $155 for Millmerran producers R.E. and M.P. Scurr.