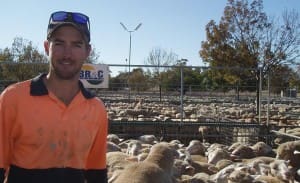 Prices for quality trade and heavy lambs general climbed further at saleyard sales mid-week after rain across most of eastern Australia.

Although rates for trade and heavy lambs were firm to easier at Victorian centres, competition was strongest for Wagga’s yarding of 33,000 lambs, where heavy trade weights lifted $7 to average $138.70 after 30-90mm of rain across the drawing region.

Prices were dearer for mutton in most saleyards, apart from Hamilton in Victoria and Katanning in WA.

Delta Ag livestock manager at Wagga Aaron Mackay said rain had a little bit to do with Wagga’s price lift, but he believed processors were simply securing supplies after the Easter break in sales.

“They are getting themselves set for next week really.”

Mr Mackay said some farmers would not hold lambs back after the rain, but had the confidence to start spraying weeds and sowing crops in the next few weeks.

“It was very timely rain.”

The lamb market has also been buoyed by exporters releasing forward contracts into winter, firstly by Thomas Foods International in SA and NSW, and more recently the Australia Lamb Company in Victoria.

The TFI forward contract price is 560c/kg for 18-34kg lambs delivered into Tamworth, NSW, in May, 570c/kg in June and 580c/kg in July, with a 50 percent upside relative to TFI’s grid of the day, with no downside.

At Murray Bridge and Lobethal, SA, the TFI price is 560c/kg in May and 570 in June, and Lobethal is 570c/kg in July, with the same upside/downside conditions. TFI’s Murray Bridge works will be closed for most of July.

The Australian Lamb Company’s spot price for 18-32kg lambs delivered to Colac is 560c/kg now, lifting to 570c/kg in June and July, and to 580c/kg in August. The forward contracts also have a 50pc upside clause if ALC weekly spot price is higher than the contract price.

The NLRS said there were some top heavy weight lambs and heavy trade weight lambs, along with lighter lambs to suit the restockers. All the regular buyers operated.

The mixed quality yarding of mutton had some top heavy weight crossbreds and only limited numbers of Merino sheep. Lightweight ewes were up to $10 dearer and the rest were $3-$6 dearer. Lightweight ewes sold from $58-$72, while the 3 and 4 score medium and heavy weight crossbreds made $76-$120. The 3 and 4 score Merino wethers sold from $33-$116, with restockers paying $110 for longer wool wethers.

At the Cootamundra saleyards on Wednesday, the agents yarded 3000 lambs and 1654 sheep.

The NLRS said lamb numbers were back due to wide spread rain in the supply area. Quality varied in the light lambs, but improved in the heavy trades and heavy weights to make up the good quality offering. Not all the usual buyers attended, but an extra buyer operated in a dearer market than the previous sale two weeks ago.

The NLRS said the quality of the yarding was very good, with more than 30 percent of the offering weighing above 26kg cwt. Trade lambs were in reasonable supply with good numbers of shorter skinned supplementary fed lambs.

The bulk of the light and medium trade lambs averaged 571c/kg cwt, reaching a top price of $136. Heavy trade lambs were keenly sought by all domestic processors and prices lifted $7, to average $138.70.

Heavy export lambs were well-supplied with plenty of lambs weighing more than 30kg cwt. Competition was very strong throughout the sale, contributing to the dearer trend of $6. Heavy lambs made from $139-$151, to average 566c/kg cwt. Most of the extra heavy lambs sold from $146-$190, or from 510-552c/kg.

Mutton quality was mixed, with a large percentage of the offering medium weight sheep. Light weight plainer conditioned ewes were keenly sought and sold from 350-394c/kg cwt. Merino ewes suitable for the trade were well-supplied and sold $4-$5 dearer, from $71-$115. There were reasonable numbers of heavy sheep and competition was stronger for the crossbred ewes, which sold $11 dearer. Heavy Merino wethers made from $105-$118, to average 429c/kg.

In Victoria at the Hamilton saleyards on Wednesday, the agents yarded 11,072 lambs, 843 more than last week, and 3855 sheep.

The NLRS said Hamilton’s first combined sale for lambs and sheep in 2015 had a very good selection of trade lambs, with many coming from feeder systems and summer crops. All the usual buyers operated.

The NLRS said lamb quality improved, with a good selection of trade and heavy lambs. The usual buyers operated in a generally firm market compared to the last sale two weeks ago. 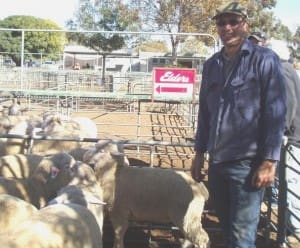 At the Ouyen Livestock Exchange on Thursday, the agents yarded 8400 lambs and 800 sheep.

The NLRS said quality was plain, but competition was solid from a full field of buyers and prices were firm on last week’s very good rates.