The unjoined ewe lambs weighed 54.2kg liveweight at assessment and had 5-7.5cm of wool. They were offered by Ray White Rural Dubbo for Iilgingery ‘Wattleglen’ and were purchased by a buyer at Trunkey Creek in central west NSW.

A week-on-week reduction was expected given the recent widespread rainfall and short trading week, AuctionsPlus said.

Offerings of new season lambs this week corresponded with overall listing numbers – also recording a 10pc decline from the previous week. A small decline in supply was met with increased demand across all six categories, with prices up across the board.

Crossbred lambs accounted for 28pc of the total offering last week, with 37,536 head offered – up 13pc. The increased offering for the category was well-supported by buyers and clearance rates increased to 96pc, while the category’s average price rose $8 to $172/head.

The number of Merino wether lambs offered fell 31pc to 28,620 head, but the average price increased by $5 to average $143/head. The clearance rates increased considerably to 92pc, as many buyers had renewed confidence following recent rainfall during the critical Spring period, AuctionsPlus said. 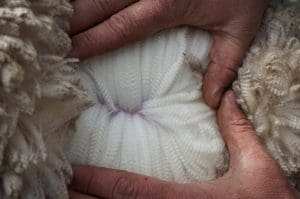 It was a mixed price and clearance rate result for the  joined ewe offering across the various categories last week. The number of scanned in-lamb Merino ewes increased by 75pc and the category averaged $299/head – up $46. Despite the price average, the clearance rate dipped to 49pc, indicative of demand for quality breeding lines by restockers, AuctionsPlus said.

The number of scanned in-lamb composite/other breed ewes offered rose to 2634 head and all were sold. Prices for the category declined significantly; however, with the average back $71 to $268/head.

The prices for unjoined ewe lines registered a drop in prices across all categories this week, with low clearance rates an indication of buyers sourcing quality through the offering. Unjoined Merino ewes accounted for 12pc of the total offering with 15,869 head listed – 20pc higher than last week. The category sold $49 easier than last week, to average $179/head, with clearance rates back to 53pc.