ONGOING wet conditions across the eastern states contributed to an easing in the online AuctionPlus sheep and lamb offering last week.

AuctionsPlus said its sheep and lamb numbers eased by 22 percent to 104,101 head in the first week of Autumn and buyers again showed some caution.

The 60,408 new season lambs listed accounted for 58 percent of the total sheep and lamb offering. Mixed results were registered across the six lamb categories and the clearance rates remained subdued, despite a steady flow of sales registered after post-sale negotiations, AuctionsPlus said.

A notable contraction in offerings from key lambing regions in South Australia and Victoria was observed last week, while New South Wale’s central west region recorded the largest throughput of 6047 head of lambs.

Crossbred lambs accounted for 13pc of the offering at 13,617 head, back 10,000 head on the previous week. AuctionsPlus said the reduced offering contributed to a slight rise in prices, which ranged from $110-$181, to average $156, up $2. The category recorded the highest lamb clearance rate for the week of 69pc. At Apsley in Victoria, 723 mixed sex Poll Dorset/Merino cross lambs weighing 47kg liveweight topped the category at $181.

Merino wether lamb numbers held firm at 22,441 head and average price of $132 was back $4. At the close of the National Lamb Sale on Tuesday, the clearance rates was 32pc, but this lifted to 52pc after several successful post-sale negotiations by Thursday afternoon.

The 5350 composite/other breed lambs listed accounted for 5pc of the total offering. The category registered the largest price gain for the week, up $106 to average $279. A highlight for the category was a line of September/October 2021 drop Nudie ewe lambs weighing 36kg that sold for $452.

Joined ewes accounted for 18pc of the total offering, despite numbers being back 35pc. Scanned in-lamb Merino ewes were the largest category with 12,296 head, a rise of 1000 head. They sold from $185-384, to average $256, back $12. The clearance rates for the category held firm at 49pc, up from 33pc after the Tuesday sheep sale.

Unjoined Merino ewes and hoggets made up most of the 19,487 unjoined ewes offered. Unjoined Merino ewe listings declined 22pc to 9264 head. Prices for the category averaged $8 lower at $191, with the clearance level rising to 73pc, a 30pc lift after the sheep sale on Tuesday.

Unjoined shedding breed ewes achieved a 100pc clearance and averaged $622. At Cobar in NSW, a line of 16-17 month-old unjoined Etiwanda Dorper stud ewes weighing 75kg sold for $1436, $600 above their reserve. 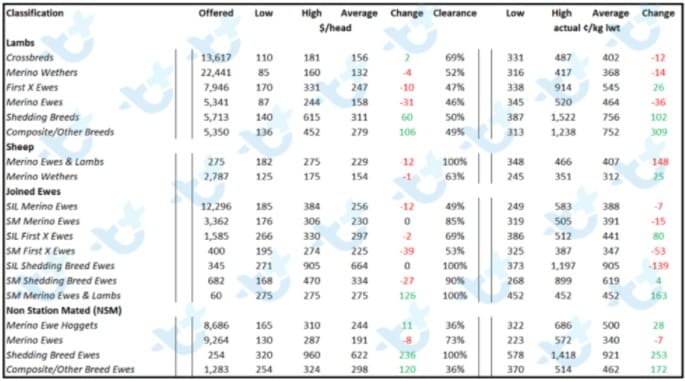