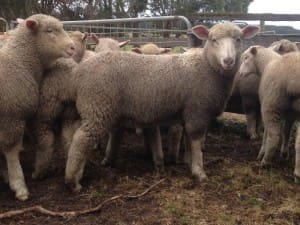 STRONG demand for light and restocking lambs continued in saleyards this week, boosted by rain in New South Wales, Victoria and South Australia.

The ESDI for mutton lifted 3 cents to 334c/kg and the national mutton indicator also rose 3 cents, to 332c/kg.

In Victoria, the NLRS said over-the-hook lamb indicators lifted across most categories week-on-week, with trade weights averaging 485c/kg cwt. Merino lambs were unchanged. There were upward adjustments to all mutton over-the-hook indicators, with medium weights increasing an average of 10c/kg cwt.

In South Australia, the NLRS said trade and heavy weight lamb over-the-hook indicators lifted an average of 7c/kg cwt week-on-week, while light weight lambs and Merinos were unchanged. Mutton indicators were dearer across all categories.

Western Australia’s OTH rates for lamb and mutton this week were unavailable when this article was published.

The NLRS said it was only a fair quality yarding with a limited selection of properly finished trade and heavy weight lambs. A fair percentage of the yarding was tail-end lambs and hoggets.

The NLRS said the quality of the lambs was quite mixed, with good supplies of well-finished trade and heavy crossbred lambs and a fair supply of Merino lambs, showing varying degrees of finish. All the usual buyers attended.

Market trends were generally dearer through the lamb classes, with all buyers competing strongly to secure requirements. Trade weight lambs were least affected, showing only a small improvement while there was some quality and weight related price change. The good quality heavy lambs in both the young and old sections improved by around $5. Restockers were active on suitable light weights at dearer prices.

There was increased demand for light weight sheep. Light sheep sold to a dearer trend, while medium and heavy weights changed little.

The NLRS said lamb quality was very mixed, with a large percentage of plainer lambs. A better run of heavy and extra heavy shorn lambs was offered. The usual buyers competed in a firm to dearer market.

The sheep were mostly Merinos and quality was very mixed. Prices lost some of last week’s jump, with Merino ewes selling from $72-$113. Crossbred ewes ranged from $71-$108. Merino wethers sold from $70-$94.

The NLRS said the lamb yarding was boosted by several large store drafts from the north-east areas of Yea and Mansfield.

The market was stronger, with the best quality trade and export slaughter lambs averaging $5-$10 dearer. Shorn and unshorn store lambs showed similar gains of $5-$10, with new restocking orders from Lake Cargelligo and Corowa in NSW and Sale in Gippsland following recent rain. There was also strong demand from Swan Hill for well-bred lines of store lambs.

The market reached a top of $151 for export young lambs estimated at around 28kg cwt. The sale featured some big one-mark lines of store lambs and restockers paid a premium for well-bred runs of 100-400 head. The best pens of recently shorn store lambs, 16-20kg cwt, made from $90-$108. Most pens of unshorn young lambs returning to the paddock sold from $75-$90 and trended over 500c/kg cwt.

There was a good offering of heavy sheep. Demand from processors was robust and prices were dearer, with some of the heavy ewes gaining up to $14. Adding support to bidding for first-cross ewes was a restocking order that paid to $95. Extra heavy first-cross ewes sold to slaughter made $90-$108, while Merino ewes in a big skin topped at $100. Recently shorn wethers sold to $95. The general run of trade ewes sold from $70-$85. On a carcase basis, good quality mutton cost processors an estimated 300-340c/kg cwt.

The NLRS said lamb supply jumped as the selling season gained momentum a couple of weeks early. Quality was again good, with some lambs showing dryness in the skins.

All weights and grades were offered, with the market reaching a top of $156 and seven pens selling over $150. All the usual buyers operated keenly with lambs mostly selling from a little easier to close to last week’s levels. Restockers and feeders were very active, and along with processors, paid mostly from $70-$115 and from $47-$65 for lighter lots. Restocker and feeder lambs were generally a few dollars per head dearer.

A few pens of shorn young lambs sold mostly to restockers at $74-$109. A pen of donated lambs sold on behalf of the Maddern trust for $350, supported by several export companies.

The sheep penning included all weights and grades, with many pens of heavy crossbreds. Most of the regular buyers operated keenly and sheep generally sold to strong demand to be a few dollars dearer, especially the crossbred sheep. Odd pens of Merino sheep were a little easier in places. Southern restockers paid from $62-$98 for crossbred ewes and to $83 for Merino ewes.

At the South Australian Livestock Exchange at Dublin on Tuesday, the agents yarded 5837 lambs, 1158 fewer than last week, and 2409 sheep, 450 more.

The NLRS said crossbred and Merino lambs sold to stronger trade and processor bidding from the usual local and interstate buyers. Most of the yarding was in store condition, but feeder and restocker buyers were keen to secure numbers to feed on.

The NLRS said fewer trade and processor buyers and restockers bid a on a similar quality penning to last week. There was excellent quality in the heavier new season lambs, while more store lambs showing signs of the dry season came forward.

The NLRS said with harvest underway, sheep and lamb numbers contracted by more than 60 percent. Prime trade and heavy weight lamb drafts were limited. Quality was mixed with many of the drafts small tail-end lots. All buyers were present with slightly more competition from domestic processors and restockers, but live exporters were not active.

Overall prices were firm to marginally dearer, with the better quality lambs up $3. Limited numbers of light young lambs sold for $35-$59 to restockers, with better drafts to feeders and processors making $60-$87. Trade weight drafts made $87-$112, to be $2 dearer. Heavy drafts reached a top of $115. Increased supplies of shorn lambs sold at dearer prices, with the light drafts sold to restockers making $50-$84 and trade drafts from $85-$108. Heavy weight lambs made $105-$116.

Ewe prices were supported by solid restocker interest and firmed by up to $3. Light ewes made $30-$48, with 2 score medium weight mutton firm at $42-$69. Better conditioned and heavy weight ewes sold from $45-$$76.50, with extra heavy crossbred drafts topping at $80. Restockers paid $30-$76.50 for suitable mature Merino drafts and younger ewe hoggets made $36-$55, both firm to marginally dearer. Wether competition was moderate, with most sales to restockers at similar prices. Heavy drafts made $85-$98 and the lighter and store drafts $45-$85. Older drafts made $56-$86.50, with some going to processors at slightly easier prices. Rams lacked competition. The best ram lambs sold to $90, with other young drafts making $45-$66 to export feeders. Old rams sold from $10-$20.