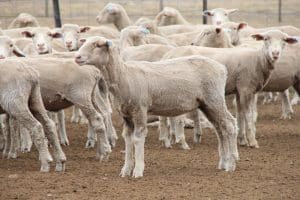 At Bendigo on Monday, the National Livestock Reporting Service said some processers reported that a lot of lambs booked-in for direct kill couldn’t be transported due to the widespread rain, creating demand for extra numbers to fill kill space.

While heavy and extra heavy lamb rates held firm for quality, trade lamb demand intensified at most centres, pushing the NLRS national and Eastern States Trade Lamb Indicators to just under 600c/kg. Domestic processors continued to buy heavier lambs to get the required weight and condition.

After Tuesday’s sale, the NLRS quoted most Eastern States Daily Indicators for lamb as improved, except for the restocker and Merino lamb indicators. The lamb ESDIs are: restocker 630c/kg, down 1 cent; Merino 562c/kg, down 3c; light 591c/kg, up 2c; trade 599c/kg, up 4c; heavy 603c/kg, up 1c. The national trade lamb indicator also lifted 4 cents to 599c/kg and the heavy indice closed up 1 cent to 603c/kg.

Mutton demand remains strong, with the ESDI and national indicators unchanged on 392c/kg.

In New South Wales, over-the-hook rates for lamb and mutton lifted slightly this week. The NLRS said wet conditions this week will tighten supplies and prices should remain firm.

Western Australia’s latest OTH rates were not available when this article was published.

The NLRS said lamb numbers fell due to rain in the supply area. Quality was good in the trade and heavy runs and most were heavy weights. Store lamb numbers were back and the number of Merinos was limited. All the usual buyers operated in the firm to dearer market.

Sheep quality varied. Prices $4-$5 due to the limited supply. Medium weight Merino ewes sold from $74 up to $121 for those with a longer fleece. Heavy crossbred ewes sold to $148.20. Most better-covered lines made around 400c/kg.

The NLRS said lamb quality varied, but there were some excellent lines of grain-assisted heavy weight lambs. Prices fluctuated, improving as the sale continued. A major export operator was absent, but prices held firm overall with only small quality-related decreases.

The NLRS said the quality and condition of the lambs was very mixed with a fair supply of trade and heavy weights and quite a few store lambs. The usual buyers attended, but without the extra competition from last week. Market trends were again dearer.

The sheep market was firm to dearer, with the plainer condition light weight sheep showing the greatest improvement.

The NLRS said lamb quality was similar to previous sales, with well finished and plainer pens yarded. The usual buyers competed in a firm to dearer market.

The NLRS said the quality of the lambs was fairly good, with several supplementary-fed lots. More Dorper lambs were yarded. Competition was stronger, with trade lambs selling $3-$8 dearer and heavy and extra heavy lambs $20 dearer.

The sheep yarding consisted of a good penning of heavy ewes and wethers, along with a fair number of light and medium weights. The market was generally firm to slightly dearer.

The NLRS said despite the increased lamb yarding, it was lower than the original draw, due to wet weather. Lamb quality was reasonable, with some well-finished crossbreds and Merinos coming in off grain. The usual buyers operated in the fluctuating market that opened easier before improving. Lamb prices overall were similar to a few dollars cheaper than last week, although any good lines of nicely-presented trade lambs received strong support and were dearer in places. Some buyers reported that a lot of lambs booked-in for direct kill couldn’t be transported due to the widespread rain, and there was demand for extra numbers to fill kill space.

The market reached a top of $212 for heavy export lambs; one of two pens that made more than $200. The general run of export lambs sold from $166-$188. Domestic buyers again competed on heavier lambs to access better carcase finish and fat cover, paying to $170.

Sheep numbers nearly doubled, but quality remained very mixed with a lot of smaller pen lots. Demand for heavy mutton was not as strong as last week, with heavy crossbred ewes selling from $98-$115. Heavy Merino ewes in a big skin sold to $124 and wethers to $125. Competition for trade weight and light sheep was solid and the better lines of Merino mutton still commanded over 400c/kg.

The NLRS the usual buyers attended in damp conditions. Lamb quality was average to good.

Lambs generally sold similar to last week. Some of the heavy lambs sold $1-$2 easier and the better covered trade weight lambs were a few dollars dearer in places. Restockers paid from $74-$120 for lambs and to $138 for a pen of first cross ewe lambs.

At the South Australian Livestock Exchange at Dublin on Tuesday, the agents yarded 9000 lambs, and 1000 sheep, 1000 fewer than last week.

The NLRS said the generally good quality crossbred and Merino lambs sold to the usual trade and processor buyers. Trade and heavy weight crossbreds were avidly pursued by trade buyers, but trade and heavy weight Merino prices eased back on last week’s extreme rates. Feeder and restocker buyers were only occasional participants and full wool Merinos attracted some solid bidding.

The NLRS said the small field of trade and processor buyers was active on a generally plain quality lamb offering that had only a few pens with weight and condition. The small number of restocker orders provided competition on lighter weights in the generally slightly dearer market.

Prices eased by $3-$5 for air freight and trade lambs and for light store lambs sold to graziers. All other types were firm on last week’s sale. Graziers competed on light store crossbred lambs at $38-$54. Merino wether lambs sold to feeders for $45-$82. Restockers paid $45-$83 for Merino ewe lambs. In the trade section, 15-18kg cwt air freight lambs sold from $75-$92 at close to 500c/kg.

In Tasmania on Tuesday, only the Powranna saleyard operated after days of wild weather and major flooding disrupted livestock movement across the state. Good quality lambs sold to strong demand and restockers bought almost all lambs under 18kg. The restockers paid $64-$80 for light lambs and $106-$110 for light trade types. Trade lambs made $107-$125, heavy weights sold from $131-$146 and one pen of extra heavy lambs made $151.